Comedian Aidan Park Shares The Art of Being YAY!

Courtesy of Aidan Park YAY! Aidan Park's new book is by turns poignant and hilarious.
Grammarly, the online writing assistant, says I’m a “vocabulary virtuoso,” which is just a polite way of accusing me of thesaurus abuse, to which I readily admit.

Hence the tweet-ready stat provided to me that reads, “This week, I used more unique words than 98% of Grammarly users.” There are two words I didn’t use, however, which I’ve just learned.

The first, “acedia,” comes courtesy of Jonathan L. Zecher, a research fellow at Australian Catholic University, who describes it as “an ancient Greek emotion” that aptly captures the “bored, listless, afraid and uncertain” feelings of our present moment. The second new word is “YAY!” The all-caps exclamation is more than a word, however—it’s a kind of “art of being” that’s been perfected by comedian and author Aidan Park. 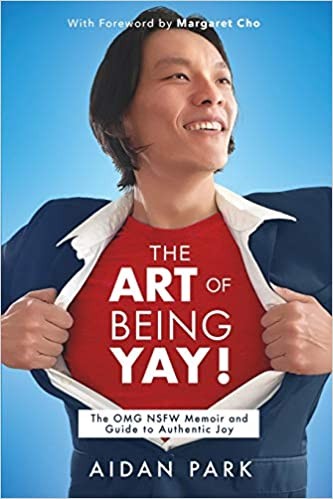 Naturally, I’ve heard of “Yay” before, but not quite in the way Park uses it—effervescing with ardent, infectious enthusiasm for life that is simultaneously an adjective, noun and art form (take that, Grammarly). His new book, The Art of Being YAY!: The OMG NSFW Memoir and Guide to Authentic Joy, promises and delivers all that, plus much more.

His beginnings weren’t auspicious—Park was basically air-dropped into the U.S. from South Korea as a kid with no English and tons of family dysfunction and facing prejudice galore, not least of which because he’s gay. Since he was undocumented, work was hard to come by and surviving as a sex worker was cut short due to an HIV diagnosis. Instead of despairing, Park threw myself into the world of self-help and cognitive behavior—specifically, neuro-linguistic programming.

“So, then it was like, ‘All right, I’m at the bottom,’” Park recounts. “So, it was at that point where a friend of mine saw my situation and pushed me into the world of empowerment. I went to this empowerment workshop and I loved it because it was actually my first taste of what empowerment felt like. From then on, I studied that a lot and I applied that to career concepts, money, relationships, communication and so on, using the tools that I learned over those years. I did neuro-linguistic programming and I literally just threw myself into that world. That’s how I got to be an ‘accomplisher.’”

Comedy became his bailiwick, and he worked his way to becoming a headlining standup (his friend, comedian Margaret Cho, wrote the forward to his book). Park found not only success but also love. Due to the unpredictable vicissitudes of life, however, Park eventually lost his husband of five years to cancer.

“It was a crazy loss, it hit me hard,” Park says. “At that point, I was so miserable, I didn’t care about anything. Like, who cares about my comedy career? …So, I was like, ‘It’s either do or die, man. It’s like, ‘Okay, let’s crap or get off the pot here.’ Like, ‘If I’m going to stay, I refuse to stay feeling this bad.’ Every day was so hard on me that I was like, ‘There’s just no way that I’m going to feel this bad.’”

Friends interceded with advice, some of which Park considered—at the time—“hippie, dippie bullcrap,” but as he later reflected, “I think that when you’re in enough pain, you’ll do anything.”

Park’s grief fueled his inspiration to apply all he had learned in empowerment workshops regarding his career goals towards his new emotional goals.

“What if I apply those to an emotional result?” he asks. “The emotional result of feeling better, going after ‘happy.’ What does that even mean? What is the emotional satisfaction? How do I go after that directly? When I started doing that, that’s when things really changed and it made me completely re-prioritize everything.”

If the existence of The Art of Being YAY! is any indication, Park’s plan worked. But could it help those suffering a bout of acedia?

“It’s a really tough time right now, and nobody really talks about emotion, everybody just goes, ‘Oh, you feel bad, here drink this or let’s ignore it,’” he says. “And, speaking from the perspective of having dealt with extreme emotion, I’ve found that the best way is to address it and go into it. The joy is on the other side of that; you need to go within. You can’t dance around it and think you’re going to run forever, because it’s going to sneak up. It will get you.”

A complimentary Kindle version of The Art of Being Yay! is available to Bohemian readers at aidanpark.com/bohemian. Listen to the complete interview with Aidan Park on The Bleed podcast hosted by Daedalus Howell, at storygramme.com/the-bleed.