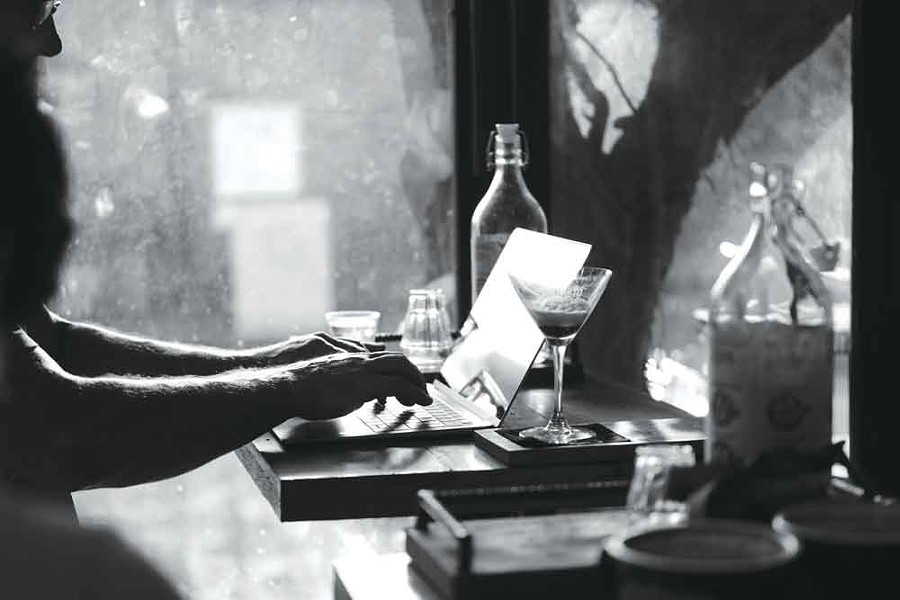 Remember writing in cafes? My own obsession began with Christine’s Cafe in Petaluma in the mid-’80s but quickly metastasized into San Anselmo’s Cafe Nuvo and finally into San Francisco’s North Beach.

This is where my cohorts and I vainly searched for traces of the Beats, who, by the early ’90s, were so heavily productized and marketed to those of us born under the sign of X that one could hardly think of On The Road without The Gap’s reminder that “Jack Kerouac wore khakis.” Why this didn’t become a title for a David Foster Wallace satire I do not know, but it remains a supposedly fun ad campaign I hope to never see again.

My type of place

When at cafes, I used to write in Portage Brand reporter’s notebooks, which I still carry in the left, inside pocket of my blazer because they’re bulletproof. Now it’s all on my phone. Not as romantic an image, but it’s a damn convenient way to run a newspaper or write a mystery novel.

Yes, I know this should be done in the hustle-bustle of a newsroom or in an overstuffed chair with a human skull on the shelf, but I’m a creature of habit. And cafes are hustly-bustly enough and I bring my lucky skull everywhere I go, anyway. You shouldn’t oppress writers with your preconceived notions of how we work—most of us are out of work, so that joke’s on you.

That said, l prefer writing in cafes, not outside them. Back of the room, back to the wall, mafia-boss style—not so I don’t get plugged unawares, but to protect my patented process from prying eyes. But now all my writing spots have turned into Cafe Covids, which restrict seating to orange playpens made of rented traffic barricades (Sonoma County) or pricey parklets (Marin County).

Works for me—except for the fact that it’s cold, and all of them are warmed with propane-powered heaters that are sure to blow into fireballs. Adds new meaning to Hemingway’s A Clean, Well-Lighted Place.

—Written over consecutive coffees at Marin Roasters and Longway in San Anselmo.

Daedalus Howell’s books and films are free to download and stream at DaedalusHowell.com.