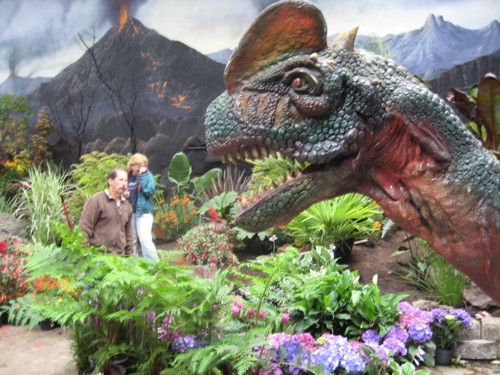 Recently, I read an interview with comedienne Kristin Schaal (the hilarious and creepily sexual #1 fan on Flight of the Conchords) in which she stated: “Wolves were so eighties.” Something about this observation struck me as incredibly astute. Their manes of gray and wild eyes could flow nicely with the feathered coifs of any classic 80s hair band. Since reading this decade-animal formulation, it’s been an amusing intellectual exercise/party trick to try and pin down other decades. Schaal wants the aughts to be all about birds, but I’m not sure. What with ensuing global climate change and melting ice caps, I have to give it to habitat-starved polar bears.

Some friends and I recently were arguing about the nineties. There seemed to be a general consensus about marine mammals (Free Willy, all those movies with dolphins). But after some more thought and retrospection to my boyhood, I realize there is only one real animus of the last decade of the twentieth century: dinosaurs.

If you were alive in 1993, and between the ages of 5 to 20, there’s a certain musical theme that will immediately evoke the transcendent beauty of flight over sun dappled ocean, the strange bird-like grace of giant reptiles, the terror and delight of fangs and fore-claws clicking on metal and of that ancient mosquito frozen in time holding the secrets of resurrection. If you were that ripe age in that bygone decade, you know what I’m talking about… Steven Spielberg’s masterpiece, Jurassic Park.

I was obsessed. Not only had I seen the first film in the franchise around a dozen times in theaters, the late Michael Crichton’s sci-fi page turner was must-have bed time reading. Before I even knew how to spell the word veloceraptor, my parents were reading me lines like: “And then the veloceraptor tore at the juicy flesh of his calf…”

There was something that felt so tangible and real in the fantastical world of Jurassic Park. Maybe it was the fact that much of the creatures we see in the film were physically built animatronics rather than CGI, but when Dr. Alan Grant lays against the rising and falling stomach of a sickly triceratops, it felt like that powerful heaving respiration could be just within your grasp as well. Those creatures were richly physical beings that seemed so real. Overlooking the razor sharp teeth and vivisecting claws, you longed to touch their wrinkled, leathery, prehistoric skin. You wanted to stand in the field where the brontosauruses strode by and feel the earth rumble below.

The idea of bringing dinosaurs back to life also may have reflected the scientific and technological euphoria of the age. Tech start-ups abounded in the late nineties, new developments in genetics and biotechnology blurred the line between science and sci-fi. It did sort of feel like bringing back dinosaurs was a possibility. After all, this was eventually the decade that brought us Dolly the cloned sheep and the complete mapping of the human genome.

Perhaps as we faced the end of the millennium, our sense of time expanded too. We were thinking of our own footmark in earth’s history—meager compared to the 160 million years of the dinosaurs. We wondered how long we would rule the planet, if a comet would come hurling down upon us as the clock struck mid-night on Y2K. Perhaps dinosaurs were somehow relatable as we came to that millennial milestone. This earth is old and the big, great and dead lizards knew this a lot better than we did.

Dinosaurs made us feel awe because they overwhelmed with their majestic scale and terrible force, they reminded us of the earth’s incredible age and they were just… really, really cool, as my nine-year-old self may have explained.

This is all a very long prelude to say that: I went on a sneak peek tour of the Sonoma County Fair’s Hall of Flowers, with the theme “The Garden that Time Forgot,” and it was neat. Super neat. I’m not someone who cares that much about flowers, but as I walked through the hall’s thin passageways between the lush garden displays, chock full of exotic flowers and shrubs, by the moat dyed the color of lava and topped with fog machine produce cloud, I felt that nine year old’s heart palpitate a little bit. When I turned to see a ten-foot long Dilophosaurus rushing at me (being loaded in by the fair’s work crew), his little heart was bursting with dino awe, ecstasy and sheer love.