A full 20 years after Straight Outta Compton, actor, director and gangsta-rap sage Ice Cube can still make your body and mind rock. While it wasn’t a sold-out show, the Tuesday night crowd at the Fillmore thoroughly enjoyed the hour-long set surprisingly filled with just a few hits from Cube’s rich catalog.

An hour after his DJ got the crowd warmed up with songs like N.W.A.’s “Boyz N the Hood” and local favorite “Back to the Hotel” by N 2 Deep, Cube took the stage and launched into “I Got My Locs On” off his excellent new album Raw Footage, a great example of a “hard” rapper growing old gracefully that sees him still conquering big issues plaguing the African-American community and the nation in general. While his delivery is much more subdued than his early-1990s hey day, the rougher “Natural Born Killaz” followed & got the crowd hyped with its backing horror-movie squeal.

Such went the perfectly paced show, with new and old songs alike receiving ample enthusiasm. After expressing condolences to former N.W.A. member/nemesis/then-collaborator-again Dr. Dre for his deceased son, Cube expressed defiance to those suggesting Cube, current star of children’s movies, quit the rap game. “Giving up the mic is like giving up my life,” he said before launching into “Check Yo Self,” the first of many line-for-line crowd sing-alongs of the evening.

With WC playing hype man the entire night (making a tight, focused onstage trio), the mediocre Westside Connection songs were inevitable but also well-received by children of the 90s in attendance, especially “Bow Down”, which sent a sea of westside hand signals in the air.

The tribute to his previous group was undoubtedly the highlight of the night, with Dr. Dre’s opening line from N.W.A.’s debut kicking the show into overdrive: “You are now about to witness the strength of street knowledge.” Cube then ripped into his classic verse of “Straight Outta Compton” with as much ferocity as he did when the track introduced him to the world two decades ago. “Gangsta Gangsta” followed, and there’s truly nothing more strangely enjoyable than hearing a multi-racial, all-ages, co-ed crowd shouting “Life ain’t nothin’ but bitches and money” in unison. 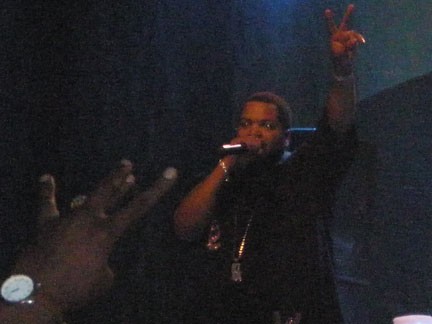 After a few solo songs from WC (another surprisingly tolerated section of the show), Cube returned for back-to-back club hits “You Can Do It” and “We Be Clubbin”, a disappointment for me considering his landmark solo debut Amerikkka’s Most Wanted went completely ignored.

But we did get a wonderfully faithful rendition of “It Was a Good Day,” perhaps the most understated and effective “life in the hood” portrayal ever recorded. Toward the end of the show, Cube took a moment to celebrate the beauty of nonviolent congregation for a genre sporadically plagued by violence. “We come in peace,” he told the crowd, "Give yourselves a round of applause.”

Photos and review by David Sason

What Is a Pyroclastic Flow? / I Got My Locs On

Check Yo Self (Remix)

Bow Down (with WC)

The Gangsta, the Killer and the Dope Dealer (with WC)

Gangsta Rap Made Me Do It

You Can Do It

It Was a Good Day

Can’t Hold Back (with WC)

It Takes a Nation