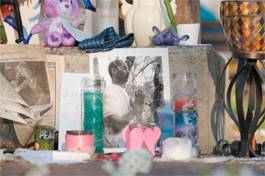 The tragedy of Jeremiah's Chass' murder by two Sonoma County sheriff deputies comes to an uneasy close with the news today that the Chass family has settled out of court with the county of Sonoma for $1.75 million. A good portion of that will go to fund their youngest son's college costs; a good portion of course to attorney Pat Emery; none of it will bring 16-year-old Jeremiah back to life.

On March 12, 2007, Jeremiah's parents knew that their 127-pound son, the product of a black father and white mother, was having an episode of mental decompensation. They had tried to find mental health help for him the night before to no avail. That Monday morning, they tried the old-fashioned method of getting their son some help. They called the fire department. Which routed it to the police department. Which routed the call to the sheriff's department. Which officers shot their son 11 times, beat him around the head, neck and buttocks, killed him, and then handcuffed him, put electronic paddles to his heart and attempted to restart his breathing by inserting a tube down his throat. They then stripped him nude and transported him to the hospital, dead dead dead. His autopsy and my thoughts prompted by it are here.

In their recounting of the timeline, not posted online but re-parsed in the print edition, the Press Democrat got the facts just kinda wrong. Again. What is more than irritating but downright chilling are the community comments accompanying the online edition, most of the rabid posters casting the Chass family as money-grubbers who lost their boy but gained some bucks. My gorge rises. When I last spoke to attorney Emery, he promised that a full court case would reveal a shocking breadth of incompetence by Sonoma County Sheriff Department officers. He warned that the bad facts as we know them are nothing compared to the bad facts as we don't know them. The $1.75 mill came from insurance monies set up to protect the county government; this money is no skin to Sheriff/Coroner Bill Cogbill or to county supervisors. What is skin to them is a full revelation of what what went down on the morning of March 12, 2007, and how badly our officers failed to protect and to serve.

As for the Chass family, it's easy to understand why they may have made the regrettable decision to avoid a jury trial. Yvette Chass, Jeremiah's mother, has assiduously avoided all media glare since her son's murder; Mark Chass has only regretfully appeared. With nine people subsequently killed by Sonoma County officers since Jeremiah's death, a full trial would be sure to shine under a bright squall of attention and outrage. They're still just trying to heal and provide a normal, quiet existence for their grade school son.

But attention and outrage are what we as citizens should continue to foster. We can't save Jeremiah Chass nor heal the Chass family, but we can act out in public to let the authorities know that his death and the death of nine subsequent people, is unacceptable—yesterday, today and tomorrow.