Although their recurring "Face 2 Face" concert is by now one of the biggest grossing tours of all time, it's still impressive to see Billy Joel and Elton John onstage together. Piano-playing pop stars are still a rarity, and these two icons showed Oakland on Saturday night why their joint jaunt is such a smash (and one of the few tickets worth the hefty price).

Starting a little after 7:30 and wrapping at 11pm, the marathon run was a nonstop extravaganza of HITS, HITS, HITS. From opening classic "Your Song" through "My Life" and "Rocket Man"– which led the mostly middle-aged crowd excitedly rushing the stage – it was difficult to find a good bathroom break (even the album cuts were from their most celebrated albums). Joel & John traded couplets back and forth in a seamless survey of Billboard hits of the '70s and '80s. Nearly EVERY song of the night was instantly familiar from decades of radio and video play, and the sellout crowd gleefully sang along all night.

While classics like "Bennie and the Jets" and 'Tiny Dancer" suffered from Elton John's aged, deeper voice, his catalog undoubtedly shone the brightest that night, even forgotten 1980s numbers like "I Guess That's Why They Call It the Blues". The crowd compensated for the high notes anyway.

While his discography has never approached the sublime melancholy of "Daniel" or "Goodbye Yellow Brick Road", Billy Joel's showmanship was astounding. Unlike John, he actually engaged the crowd with jokes, revolved his piano in an egalitarian gesture, and worked a snippet of Vallejo's own "Dance to the Music" into the middle of "River of Dreams". He also apologized for postponing the show originally scheduled for last November before celebrating the serendipitous Valentine's Day Eve replacement date. The throngs of lovers in the house cheered in agreement.

But even Joel can only do so much while sitting down. To really connect, Joel picked up a guitar downstage for a faithful "We Didn't Start the Fire" and tried his best mic-stand acrobatics for the perennially relevant "It's Still Rock and Roll to Me". Joel also introduced each member of his backing band throughout his set (something else Elton John sadly forwent, even with longtime guitarist Davey Johnstone bopping alongside him).

The showcase ended as it began, with John & Joel alone, sans backing band. The appropriate closer "Piano Man" brought a final frenzy with its slightly modified final verse: "You're a pretty good crowd for a Saturday, and the manager gives me a smile; because he knows it's been me you've been coming to see, to forget about life for awhile."

SETLIST (Thanks to Jim Harrington) 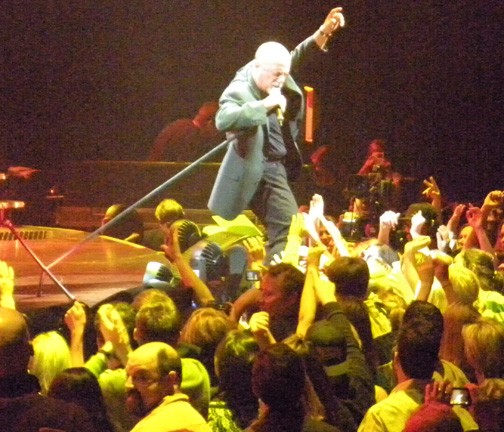