The Last Morning at the Rialto 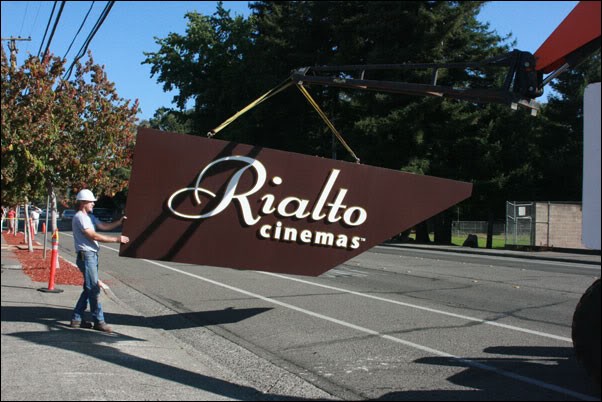 It was 8:45am at Rialto Cinemas, and Ky Boyd, who hadn’t gotten much sleep, couldn’t remember how many hundreds of people he’d hugged the night before. In the lobby, a vase of flowers still sat on a table, next to an overturned table, next to another jumble of tables and chairs all set for the moving truck. In the main auditorium, a five-man crew with ratchet tools were removing theater seats, and outside, pylon cones on Summerfield Road steered traffic around a giant orange crane tractor, the arm of which extended to the Rialto’s large marquee sign. Today, the sign would come down.“Last night was overwhelming,” said Boyd of the Rialto’s final night of operation, the 'Last Night at the Rialto,' which over 800 people attended. “So many people have embraced this dream of mine, to operate an art house. What has happened, it didn’t just happen to us, it happened to the audience. That’s why they’re so passionate about it, and so upset. They have ownership of this. They helped make the Rialto. They are an essential part of who and what we are, and so it’s personal to them. It’s not just about me. It’s personal to them, and that’s huge.”

Boyd added that he is in talks about an existing building—he wouldn’t say where—that may prove suitable for a relocated Rialto Cinemas, rather than building from the ground up as previously hinted. But one thing was certain, and that’s the city where he wants to reopen. “For it to really, truly be successful,” he said, “it needs to be in Santa Rosa.” (“There are a lot of sophisticated transplants here,” mentioned Padi Selwyn, who since March has worked public relations for the Rialto’s closing. “Not all of us grew up growing prunes and hops.”)

Surrounded by handwritten testimonials in the lobby from patrons, and knowing this day would come for six months, Boyd’s was the face of emotional exhaustion. Last night he’d personally addressed all five auditoriums, thanking his loyal clientele for their support. In introducing the screening of To Catch a Thief, he reached the part where he thanked his staff and his partner, Michael O'Rand, “and I kind of started to cry," he said, visibly holding back emotion simply in the retelling.

Just then, Michael Burch, a principal at ScottAG who designed the marquee sign, approached. “So when you’re ready, we’re ready,” he said, with delicate avoidance of the task.

Boyd joined a small group on the sidewalk. On the roof, a worker removed the last bolt, and in the tractor, another turned the key and pulled a lever. The Rialto Cinemas sign levitated from the mansard roof, hanging on the crane arm, and then gently descended from the building. Cars slowed. A jogger ran past. A young girl across the street waved. The sign came to the ground. The theater officially no longer belonged to the Rialto, and Burch put his arm around Boyd, who turned and buried his head in his shoulders.