Photos and review by David Sason

I'm not sure what's more amazing: singer Sade's understated anti-diva confidence or her jazzy, soulful music's ability to touch an audience, even after a full decade away. Last night at the HP Pavilion, at the first of three Bay Area shows (she and John Legend play Oracle Arena tonight and tomorrow), the Nigerian-British vocalist and her eight-piece all-male band simply enchanted the surprisingly eclectic crowd with faithful renditions of her three-decades-plus career. The setlist spanned from first single "Your Love is King" to "Soldier of Love", the title track to her most recent album, released in 2010 after a decade away from the public eye. The latter served as the opener and with its mixture of live dancing and video projection backdrop set the stage for the rest of the show's impressive visuals. Each number was complemented perfectly by a mood-appropriate multimedia art exhibit, from the film noir/city skyline of "Smooth Operator", to the fire and sun imagery in the intense "Pearls", to the sustained orange warmth in her classic lullaby "By Your Side", which translated palpably to the countless swaying couples in the near-capacity crowd.

All of this was secondary, of course, to 52-year-old Sade Adu herself, who was a formidable vision of youthful perfection - flawless in both buttery voice and flowing physicality. It was astonishing how little she seemed to age from the days of her 1980s videos, some of which appeared behind her. She and her band were simply adored from start to finish; each dance move, smile, gesture and instrument solo were met with bursts of applause and impromptu standing ovations like I've never seen before. The famously reclusive singer was fairly talkative as a result, and gushed more than once in appreciation and genuine surprise at such outpouring of love.  Her versatile band was a revelation, especially when they turned "No Ordinary Love" into a surprisingly potent rock power ballad. Their skill more than justified Sade's lengthy anecdote-heavy introductions of each member, perhaps the night's strongest confirmation that she's a class act and "just one of the guys" despite her incredibly sensual charisma. Sade's tour just could be the most worthwhile arena show of the year. Let's hope it won't be another decade until the next one.Sade and John Legend perform at the Oakland's Oracle Arena Friday and Saturday nights. Tickets are still available here. 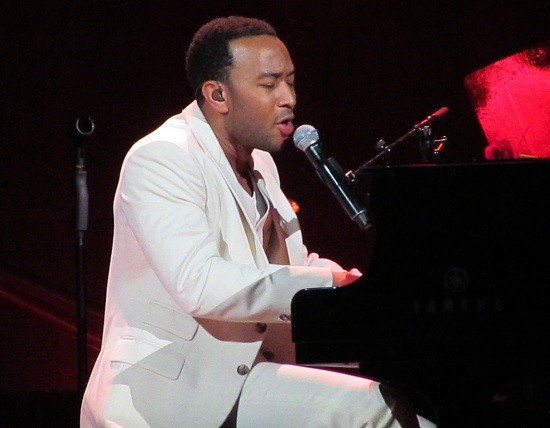