French Laundry’s in the HenHouse 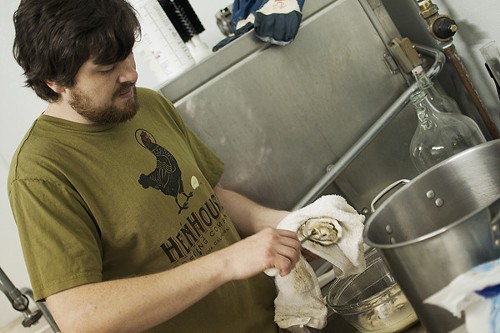 “I’m not a hundred percent sure, but I think how it happened was that they got a sample from a friend of a friend,” says Shane Goepel. “They emailed us back saying that wanted to carry it.”

Goepel, brewer at HenHouse Brewing Co. in Petaluma, is understandably excited about the news that the French Laundry will be offering HenHouse’s Oyster Stout on their menu. “We’re really excited to have a different clientele,” he adds. “It’s cool to be represented in such a prestigious restaurant.”

As mentioned in Ken Weaver’s Bohemian profile of the small craft-brewers, HenHouse’s Oyster Stout is brewed in two variations: one using crushed oyster shells—the type soon to be offered at Thomas Keller’s Yountville icon—and one where the whole oyster is thrown in the batch, an unusual procedure HenHouse has been experimenting with. All HenHouse’s oysters are sourced locally.

Goepel doesn’t foresee an immediate increase of production of the beer, and as of right now, Henhouse is already operating at 100 percent: three men with daytime jobs and a passion for brewing beer. “All of us would love to give up our day jobs, but we’re a small system, and we’re really working at it,” Goepel says.