Farmed Salmon Worth Another Look 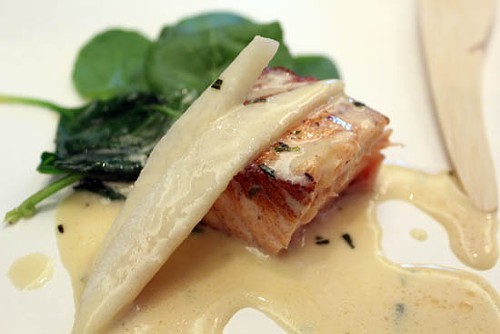 There are two opinions on farmed salmon. One says that salmon is salmon and it’s good for you no matter where it’s from. The other says farmed salmon is horrible for your body and the environment no matter where it’s from. Whereas though the latter school of thought may have once been the case, in the past few years there have been dramatic changes made in the way salmon is being farmed; it now takes another level of investigation to determine what really is the wave of the future.

Chef John Ash has been involved with the Monterey Bay Aquarium’s Seafood Watch program since it launched in 1999. The organization is regarded as the most stringent guide of what’s sustainable in terms of fishing and what’s safe for the human body in terms of minerals and pollutants. Currently, farmed salmon is on the “Avoid” list because of environmental concerns from the process and the amount of fish it takes to feed the salmon. The current standard, according to the Seafood Watch, is three pounds of feeder fish for every pound of farmed salmon harvested. It doesn’t take a math whiz to figure out that isn’t sustainable, and that’s one of the main reasons the program does not endorse the practice. But if the wild population of salmon continues to be the only source that’s used for food, even with the best regulations on fisheries it is estimated there will be none left by the end of this generation.

“I’m an old guy,” says Ash at a demonstration this morning for a new company offering sustainably-farmed salmon. “I’ve seen the ups and downs of farmed salmon.” He even took a tour in 1981 of a salmon farm in Norway, but it was less than inspiring. “It was like conventional chicken farming,” he says. “You could literally walk across the water on the backs of the salmon.” This created the need for extensive antibiotics and still resulted in low-quality fish. Fast forward thirty years, and companies are still trying to figure out how to sustainably farm the world’s favorite fish, but things are getting significantly better. 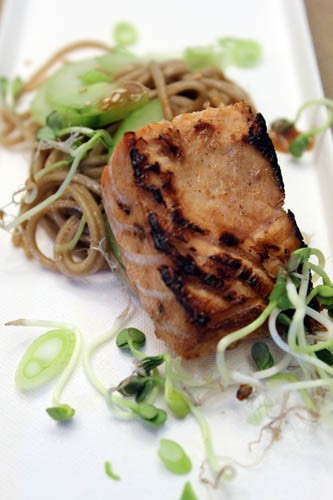 For example, Verlasso, the company he was endorsing and which supplied the fish for a cooking demonstration to about 30 students, media members and fish buyers at the SRJC Culinary Café, has found a way to control the ratio of feeder fish to 1:1 by supplementing omega 3-rich sardines, anchovies and herring with omega 3-rich yeast borne from algae. Coloring of the flesh comes not from dyes or chemical agents fed to the fish, but from beta carotene harvested from another type of algae, “which is what makes flamingoes pink,” says Verlasso Director Allyson Fish (yes, that’s her real name). The resulting mixture is pressed into pellets and fed to the salmon. As for Ash’s first farm experience, Verlasso is among a new breed of companies expanding the size of their ocean-based pens, giving the fish enough room to keep them from getting sick en masse. 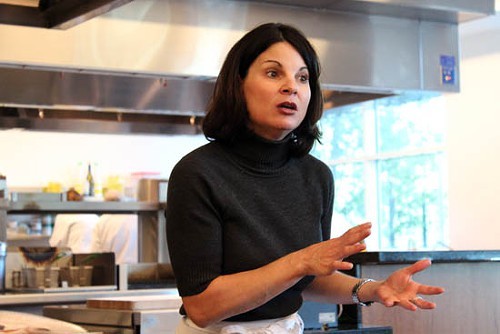 Despite the slew of feel-good facts about any company, and no matter how environmentally friendly the farms are, the bottom line boils down to taste. Will chefs and consumers buy this? Does it taste better than what’s available now? With endorsements from Ash and chef Jennifer Bushman, who also spoke on behalf of Verlasso this morning, the tide may be turning on the farmed salmon debate. It tastes good, with a fat percentage closer to wild salmon than any other farmed Atlantic salmon (which is by far the most popular farmed salmon species). Ash said, “I don’t think you could tell the difference,” between Verlasso and wild Atlantic salmon. One caveat to this argument, however, is there may not be a chance to tell the difference. Wild Atlantic salmon are all but extinct due to overfishing. Pacific salmon is a different species, therefore will have a different flavor to begin with, farmed or wild.

But no matter how tasty farmed salmon is, wild salmon will always be preferred by top chefs. David Holman, executive chef with the Charlie Palmer restaurant group in Reno, said he has to keep salmon on the menu year-round due to customer demand, but chooses to offer wild salmon when in season. He says customers are always informed of the origin of their fish. 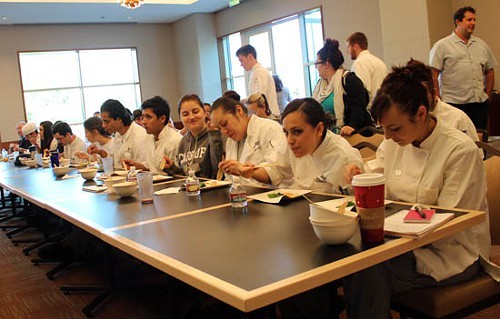 Holman cited showcasing local ingredients and seasonal bounty as reasons, but it’s no coincidence that wild salmon does taste better. As a former fishmonger, I have never had anything from a farm that tastes as good as wild salmon. Consumers know this, too. Wild salmon, even at $25 per pound, was nearly impossible to keep in stock when we could get it. Farmed salmon, despite being from a sustainable farm similar to Verlasso, sat neglected in the corner of the case even though it was half the price.

Jodie Lau, of Sonoma County supermarket chain G&G, was on hand with other executives from the market. All seemed impressed with the fish and the company, and Lau said she hoped the market could look into ways to begin carrying the fish year-round. If offered at $10.99 per pound retail, it would be comparable in price to other farmed salmon of lesser quality.

Verlasso is trying to break the stigma of farmed salmon not just for profit, but for the future of the world’s fish supply, says Allyson Fish. The company is working with Seafood Watch in hopes it will become the first farmed salmon to earn a “recommended buy” from the organization. It’s one of six aquaculture companies, the only one producing salmon, vying for this certification. By shooting for the top, this opens the door for other groups like the Marine Stewardship Council to look at farmed fish in a different light, and hopefully help change public perception through education.