Is Raley's Going the Way of Walmart?: Grocery Strike Goes Into Day Four 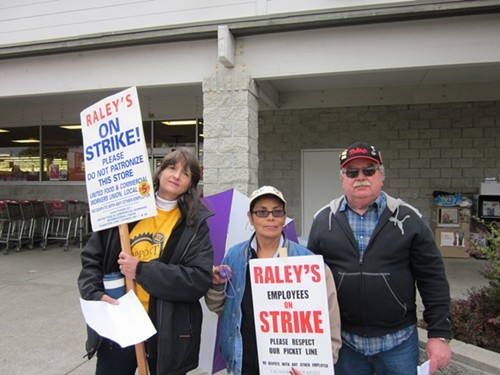 Raley's workers across Sonoma County and Northern California continue to strike after thousands of workers walked off the job on the morning of Sunday, November 4. The action follows a breakdown in negotiations between leaders of UFCW-8 Golden State and UFCW Local 5 and company labor negotiators. Raley's, Nob HIll and Bel Air stores in Northern and Central California have been affected in a dispute affecting approximately 7,000 union members.

Bob Tiernan, the current Raley's-Nob HIll Labor Relations Director, is the former chair of the Oregon Republican Party. The UFCW accuses Tiernan of being a "carpetbagger" who has "sold a formerly decent company a bill of goods."

This is the first time in the 77-year-history of the Raley's-Nob Hill grocery chain that workers have walked out. Nearly all employees of the Rohnert Park store are on strike, with "temporary" workers taking their spots at one of the chain's oldest stores. Meat counter workers represented by the UFCW are on strike at the Santa Rosa, Windsor and Petaluma stores.

Joe Colosi is a retired Raley's meat department worker. He worked for the company for 18 years. He says that they are not striking for more money, but to maintain current benefits for both retired and current employees. Raley's has proposed switching a company plan in which the store would take over the management of health and welfare benefits. In addition, the company says they can "no longer afford" to provide health coverage to retirees once they qualify for Medicare.

"Our fathers started to build the company, we built the company as the baby-boomer generation, which is when they did the most growth," says Colosi.

Raley's has more than $3 billion in annual sales.

The company looks to be taking cues from Walmart, a multi-billion dollar company that pays its low-level workers an average of $8-$9 dollars an hour, forcing some of them to file welfare to get medical benefits, says Colosi. This past October, Walmart workers in 12 states actually went on strike for the first time in the company's history.

"Raley's says the reason they need the money is to cut their expenses so they can compete," says Colosi. "But they're in a high-end grocery business. They cater to a different clientele."

Mike Teel, President and CEO of Raley's (and the grandson of founder Tom Raley) posted an open letter to customers on their website, in which he writes that Raley's has been "impacted significantly by the recession and the continued expansion of other stores selling groceries."

"Unfortunately, most of these stores are non-union, with lower operating costs that have made it harder for Raley's, Bel Air and Nob Hill Foods to remain competitive. As a result, our market share has suffered a significant decline. In an effort to stabilize and put us back on a growth path, we have focused on two critical areas: reducing our operating costs and improving the value we deliver our customers."

Strikers say the company has more than enough profit to keep benefits as they stand. They've been handing out fliers with a photo of the Teel Family yacht, "The Ozark Lady," taken at Bay Ship in Alameda; Colosi says the yacht costs the family millions with maintenance.

Becky Fernandez is 57 years old and has worked in the Raley's meat department for 13 years. She says that if the cuts to benefits go through she won't be able to retire next year as planned.

"I was planning on retiring next June. If they do the takeways I cannot retire until I'm 62," says Fernandez. "I've worked a long time to get where I'm at now and it's very scary."

Colosi accuses the company of taking advantage of a bad economy, as well as listening to "union-busting" attorneys that see this as a good time to break down the union.

"90% of this business is goodwill," he adds, explaining how times have changed since Tom Raley, who was beloved by many employees, was in charge. "Once you lose the goodwill, it's not going to work for you too well. They've done a lot of good things, but this is the worst thing I've ever seen happen in my history with Raley's."

Note: This post has been corrected to reflect a mixup between "sales" and "profits" in a quote from Colosi.