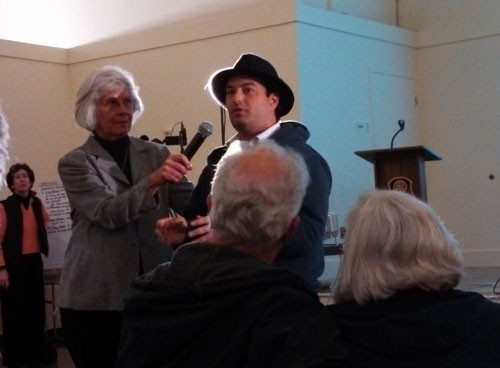 The 100 people protesting on Wednesday night outside the Pickleweed Community Center—and the three cops patrolling the parking lot, with four more officers inside the meeting room—appeared prepared for a fight Wednesday night at Citizen Marin’s first-ever town hall meeting on Bay Area planning and affordable housing.

The Canal Alliance and Marin’s Action Coalition for Equity held up signs saying “I Just Look Illegal” and “End Apartheid in Marin,” protesting the neighborhood groups that have worked to stop affordable housing projects. Groups like Friends of Mill Valley and the Novato Community Alliance, both part of Citizen Marin, have come out against low-income developments in the past, citing concerns about high density. While many in the organizations have said they don’t associate with the extreme right, their rhetoric has often become nasty, and has divided communities.

But Silvestri, who called his politics “far to the left of President Obama,” gave a speech arguing that the “top-down, one-size-fits-all planning” of the One Bay Area Plan, which allocates housing requirements, isn’t going to solve Marin’s problems. Instead, he argued—to increasing applause and heckles from the audience as the night went on—that what Marin needs is senior housing, infill housing, second units and the ability for young, working-class families to buy into the community.

“We already have everything they’re trying to sell,” he said. 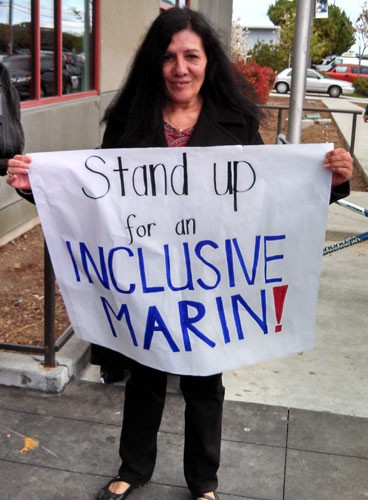 Instead of building more high-density, low-income projects next to freeways, he argued, the minimum wage should be raised, healthcare should be provided for free, and ground-up community priorities should be created for Marin’s towns. He posited further that Marin should opt out of the Association of Bay Area Governments (ABAG) and create, with Napa and Sonoma, its own council of governments—an idea supported by Corte Madera’s withdrawal from ABAG last year.

While some in the audience cheered at the ideas, others Silvestri’s speech as nothing but a smokescreen.

“A lot of what you said makes sense, but a lot of your solutions are way down the road,” said Steve Bingham, of San Rafael.

As the night went on, the town hall forum became a public space for people to decry mortgage payments, question the existence of global warming, and yell at Silvestri that some of his proposals sounded like communist socialism. Toni Shroyer and Susan Kirsh, supporters of the anti-ABAG movement and moderators of the forum, battled with speakers for control of the microphone and encouraged hostile forum-goers to wrap it up.

But, while there was talk of lawsuits to fight ABAG and more forums in the future to discuss alternatives, many who came hoping to learn about affordable housing options felt discouraged. Few solutions or changes were tangible—and that wasn’t good enough, said a number of activists.

“Business as usual,” said Kiki LaPorte of Sustainable Fairfax, “is how we got to where we are now.”