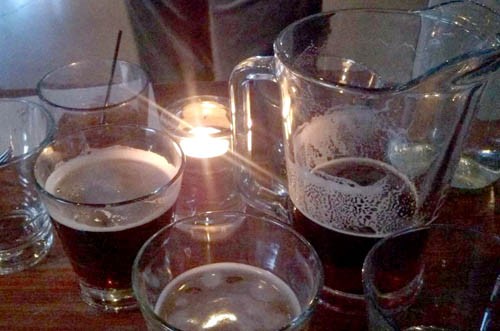 Spoonbar is a wonderful restaurant on its own. The place is beautiful and the food just as pleasing. The bar is highly acclaimed and it has a great reputation. So, why take a chance with pop-up dinners when the day-to-day operations are seemingly solid enough on their own? Because Spoonbar is not just about subsisting at a high level, it's about taking risks and pushing the boundaries to celebrate the culinary nirvana that is the North Bay.

Upon arrival at the Moonlight Brewing popup dinner April 25, Spoonbar's mixologist Daniel Sorentino served up a cocktail made with Death and Taxes beer, Genever gin, housemaid ginger beer, molasses, allspice and lactic acid. The best thing about this was the use of appropriate, large cubes of ice. It was an experiment, a risk, and though it worked well enough, I was expecting something more smooth and refreshing like the beer it was based upon. This cocktail was instead full of strong flavors with a warm profile, but the surprise and innovation was appreciated. 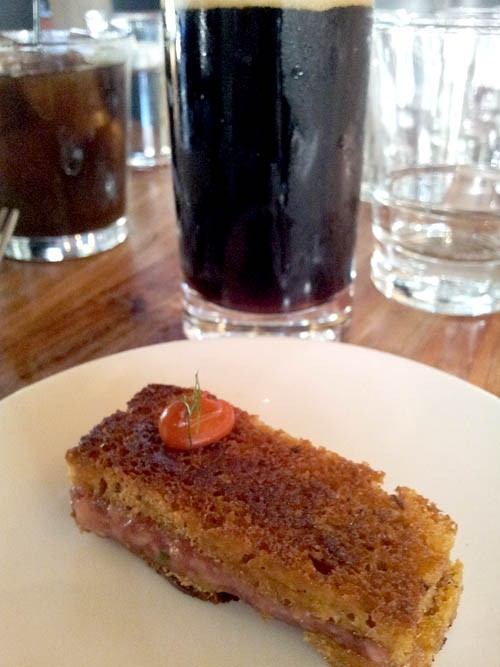 The first course, paired with Moonlight flagship Death and Taxes black lager, was outstanding. Caroway foccacia sandwiches with pork saucisson and dill made up fingerling grilled cheese-like sandwiches. My only wish for this course is that it there was more of it. The toasted grains played well with the flavors of the beer and the richness was cut by the refreshing taste and carbonation of the lager. 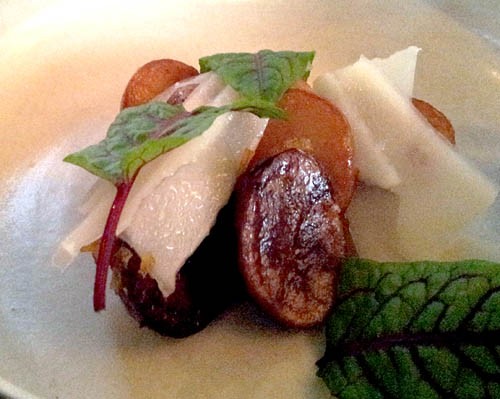 Second course was a mix of potatoes with preserved lemon and sorrel paired with Misspent Youth. The sweetness of the citrus brought out the best of the pale ale, and it seemed as though this dinner would just get better and better.

Third course reintroduced meat to the menu with wage beef tartare, red jalapeño and a puffed rice cracker paired with Twist of Fate bitter ale. The style of beer doesn't always accurately describe the taste of Moonlight's brews. This "bitter" was more of a rich amber ale, which was a great choice with the rich, sweet raw beef. The red, sweet jalapeño contributed to the sweetness with a touch of heat, and the cracker played up the beer's hop flavor. Could it get any better than this?

The main entree was slow roasted duck with ramps and sunchokes. This was paired with Points North, which tasted like an American schwarzbier (because, I found out later, it is). This dark brew is thick and rich, notes of fruits like prunes and red wine grapes. It went well enough with the duck, but it seemed that the pairings had plateaued with the previous course. Again, the food was superb, but I would have loved another slice of succulent duck.

Dessert wound up being the most filling course, and the most intriguing pairing. A butterscotch tart with coffee ice cream and baked meringue replaced the advertised menu item of tobacco ice cream and macaroon. However much I was looking forward to being able to have said I tasted tobacco ice cream, coffee flavor made a fine substitute, probably more suited to my taste, anyway. This was paired with Uncle Ollie, an unhooked beer flavored primarily with cedar. I was under the impression that beer was not beer without hops. Not true. The flavor is that of a grassy meadow, possibly the hay fever inducing scent of a horse stable. This didn't taste like traditional beer, and does not seem like a beer that would appeal to many on its own. But paired with sweets like this made the most unlikely delicious combination. It sang the tune of balance. Like wine, which can have "desirable" notes of a grassy meadow, old sneakers or wet dog, this beer was not unpleasant but extremely unique. It's a flavor that will be remembered for decades after only one taste.

Spoonbar proved once again that it is one of the better restaurants in Sonoma County, not just an over-hyped, overpriced Friday night reservation destination. Events like this should fill up fast in the future, and not just for fans of the hard-to-get beer.