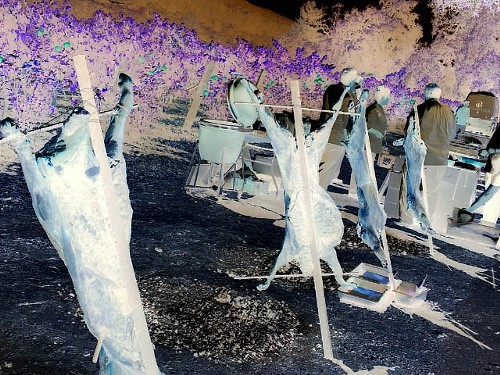 I took an extra long shower this morning. It’s not so easy to get deep, penetrating smoky meat aroma out of one’s pores with just one scrub, and considering where I was yesterday, I might be taking another shower in the middle of the day.

Cochon 555’s Heritage Fire event at Charles Krug Winery in St. Helena celebrates chefs who specialize in cooking a whole animal, over open flame, with just the right amount of crazy-eye to make it look like they’re having too much fun. The carnal display of butchery drew groups of salivating, bloodthirsty human savages to the demonstration station, eyes glued to the knives carving up cuts of whole pig, goat and rabbit as if they were watching the Super Bowl. Abundant wine and hard cider didn’t hurt the desire to watch, either. There’s something alluring about raw meat, and I think that’s what the organizers of this event have figured out.

We started off with a nice juicy pinot and the first food in our path was heirloom tomato salad from the Culinary Institute of America (which is located across the street from the winery). Then we had lovely toast with cheese and other toppings from Jacobsen Orchards. I was beginning to get worried that the meat wasn’t ready yet, or that we had misunderstood the idea of the event and it was somehow, for some ungodly reason, celebrating the absence of meat.

But the next table over had lobster salad, and next to that was a crispy fried beef tendon. Once the tendon flavor hit my taste buds, I could feel the transformation taking place. My placation of vegetables and their place in society jumped out the window, tumbled down a mountain and sunk to the bottom of the Pacific Ocean. My eyes rolled back into my head and reemerged as white orbs with beady red pupils in the shape of a cleaver. I had a sudden urge to watch “American Psycho” and “Gangs of New York” simultaneously. 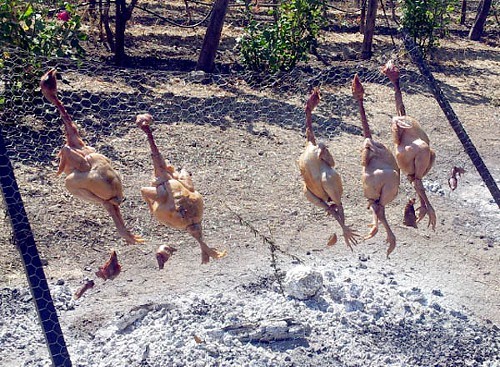 Even with minimal seasoning, the meat at Cochon was incredible. The chicken, a rare heritage breed, possibly Buckeye, was roasted with salt and pepper, head- and feet-on, laid atop chicken wire propped over an open flame. (Now I know why they call it chicken wire! Lol!) This was literally the best chicken I’ve ever tasted. Ever. Hands down. No contest. I really wish I’d confirmed the name of the breed, but sensory overload will make one forget to gather details. I do know it was from Azalea Springs Farm of Calistoga.

The chicken table was pretty close to the Crispin Cider table, which resulted in liberal pours of unique, wonderfully refreshing bubbly beverages. The “artisanal reserve” was especially delicious. The unfiltered apple cider is brewed in a Belgian style, with herbs found in light wit-style ales entwined with tart, sweet apple flavor. Another cider was aged in bourbon barrels, giving the light drink a heavy, somewhat bitter taste and a depth not normally found in cider. It wasn’t perfect but had potential to be an extremely good pairing with sweet meat. That theory was tested with duck.

Duck tostadas from Antica Napa Valley were stunning: sweet meat and fresh cabbage meant not much else was needed (except the duck fat brownies, which they advertised but I never saw materialize). But the Mexican dish that reigned supreme this day was the beef tongue tacos by The Thomas. The display included whole tongues punctured by a metal rod, hovering over an accouterment bar for the tacos, which were being handed out with a smile. Everyone was smiling at the taco bar. In fact, I’m still smiling from my experience at the taco bar. These weren’t tacos de lengua, these were Beef Tongue Tacos from The Thomas. The difference is size (these were enormous, by taco standards) and flavor (the handmade sauces, not salsas but sauces, were each incredible on their own and each made the tongue tacos a different experience.) The elote (skewered corn with queso fresco and hot sauce) served with these tacos was almost better than the tacos themselves. Almost.

I’ll mention the seafood casually because, stacked up with flesh of the land it doesn’t really compare. For the first time I can remember, I ate a raw oyster. I didn’t die, as I predicted might happen, but I didn’t have any epiphanies about the shellfish I had been neglecting my whole life. Sturgeon, prepared on a spit by Goose & Gander, was not bad. Sturgeon really needs to be plated and gussied up to be enjoyed to the fullest, but the crispy sturgeon skin was great. It was like sturgeon-flavored popcorn without any fishy taste.

All in all, I ate the following animals yesterday: beef (tartate, tongue and tendon), pork, chicken, squab (pigeon), lobster, sturgeon, duck, anchovy, goat and oyster. It really could not have been any better, and anyone who could possibly make it to next year’s event should buy tickets now. Right now. 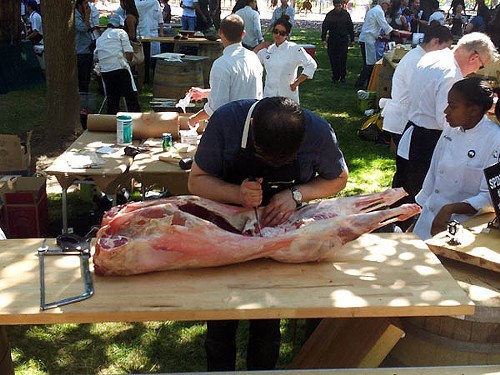