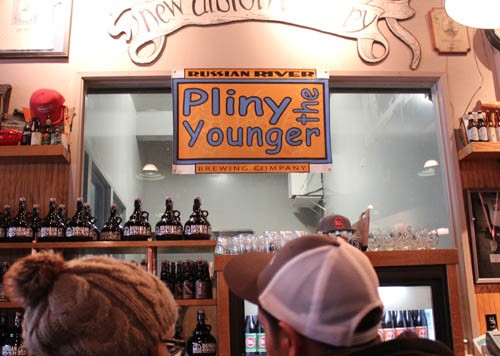 The annual release of Pliny the Younger by Santa Rosa’s Russian River Brewing Company was not dampened by rain today, with hundreds lining up around the block to taste the triple IPA style beer many refer to as “the best beer in the world.”

The line stretched around the block, with the first die-hard beer fans plopping down their chairs at 10pm, when the brewpub was still open the night before. A strict one in-one out policy was enforced, with patrons waiting for to be saddled with the blue wristband that grants access to the legendary brew. One group waiting to enter at noon said they had lined up at 7am. Many others around the block may not even get a chance to sample the beer on its first day of availability because the brewpub has a set limit on how much it will serve per day to ensure there will be enough for the entire two-week run.

Russian River was ready for this annual melee with popup canopies in front of the pub and extra security on hand. A line at the back door was a dozen deep, and that was just for folks looking to fill a growler and leave—no Younger allowed. Inside, the scene was jovial, with 10-ounce glasses of the 10.25% ABV brew (at $4.25 a pop) clinking and emptying down into the gullets of smiling patrons. The beer has caused quite a stir each year for the past four, with lines getting longer with each passing year.