D.A: No charges for Gelhaus

by Tom Gogola and Charlie Swanson 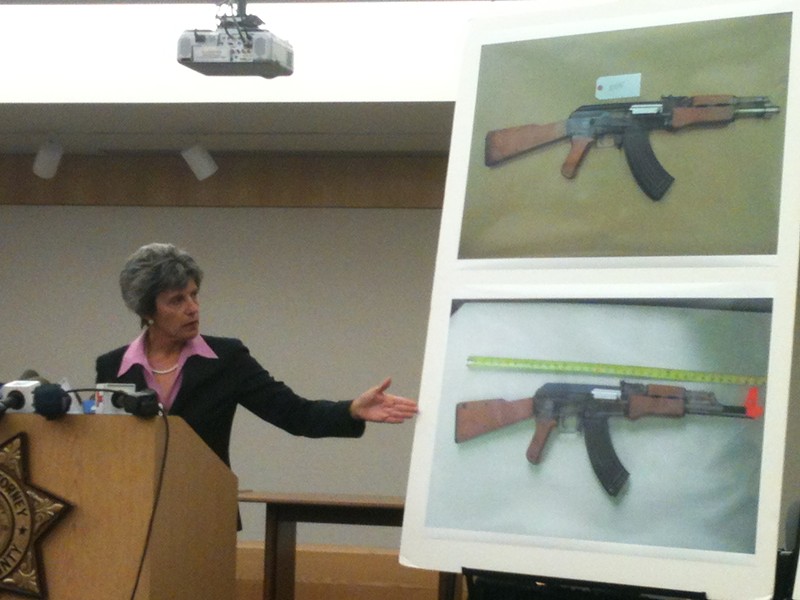 After months of rumors and bitter controversy around the 2103 Andy Lopez shooting in Santa Rosa, Sonoma County District Attorney Jill Ravitch announced Monday that she would not pursue criminal charges against Sonoma sheriff’s deputy Erick Gelhaus. The announcement came against the backdrop of a protest that had already been planned at Ravitch’s office on Tuesday.

With Ravitch’s decision today, that protest is definitely and obviously moving forward, says activist Mary Moore, who is part of the Justice Coalition for Andy Lopez.

Gelhaus shot and killed the teenage Lopez last October in the unincorporated Moorland Avenue area south of Santa Rosa after a very brief encounter with the child, who was shot while carrying a toy assault weapon that had its orange safety tip removed from the muzzle, rendering the toy difficult to distinguish from an actual weapon.

Ravitch told reporters that she personally reviewed the facts of the case and that “the loss of this young life is a loss for us all.”

She said she personally went through the facts of the case that led her to take a pass on charging Gelhaus.

She said the youth was walking with the toy gun, barrel-down, when officers pulled up behind him. The officers, she said, told Lopez twice to drop the gun, and says a witness testimony bore out that claim.

Lopez turned, and as he did, the barrel rose, Ravitch said.

Gelhaus then fired eight shots from his service revolver, seven of which hit Lopez. Gelhaus was placed on restricted duty as Ravitch reviewed the facts of the case.

Naturally, the parents of Andy Lopez were not happy with the outcome today. Nor the Justice Coalition for Andy Lopez, which planned a Roseland meeting for later in the day Monday to figure out what the group’s next move is, beyond the Tuesday protest.

An outraged Moore says she’s not sure what the group’s options are, other than to “yell at the top of our lungs,” or elect better politicians. Or, get the Department of Justice interested in the civil rights of Andy Lopez, she said.

Ravitch’s slow-roll on the decision to charge or not charge Gelhaus raised eyebrows on several occasions.

A few times in recent months, rumors were floated and batted back that a decision from Ravitch was imminent. Lopez activists were eventually convinced she wouldn’t render a decision on Gelhaus until after the June 2 election, which Ravitch won handily.

Yet the District Attorney’s office appears to have jumped its own gun in announcing the Gelhaus decision today.

Moore says the D.A.’s office sent out an email Monday morning that said Ravitch wouldn’t be pressing charges against Gelhaus. Moments later, a second email went out, to the effect of: Forget that last one, it wasn’t supposed to get sent.

But reporters had already leapt to the story. A press conference was scheduled for 2 pm today, and a weary-looking Ravitch released a 52-page public statement explaining her decision. She couldn’t say that the investigation was “extensive and exhaustive” enough times for reporters and note that, “historically, the DA doesn’t release reports this detailed to the public.”

“Obviously we are deeply disappointed,” says Moore, who adds she was surprised that Ravitch made her announcement today, given the Tuesday protest had already been planned.

“Why would she make it so easy for us by putting it out today?” Moore wondered. “When I first heard this, I thought maybe she would indict. They really goofed—and then they drew attention to their goof.”

The City of Santa Rosa issued a statement Monday afternoon calling for calm in the streets: “We hope our community can come together to keep everyone safe, in particular our young people who were so deeply effected.”