Director and producer William Lustig broke out on the horror film scene in 1980 with his gritty and gory debut feature, Maniac. Hailed at the Cannes film fest, and reviled by American film critics, Lustig’s stylized and violent film remains a landmark in the genre for its unflinching performance by actor Joe Spinell (The Godfather, Taxi Driver), special effects by Tom Savini (Dawn of the Dead) and its unique look inside the mind of a killer. On Jan. 29, Lustig appears in Santa Rosa to screen all-new digital prints of Maniac and his directorial follow up, Vigilante.

Speaking by phone from his home in Hollywood, Lustig talks to the Bohemian's Charlie Swanson and Sonoma County-based blogger and horror film aficionado Eric Ritz about Maniac and how his passion for the grindhouse translated into a lifetime of filmmaking and film preservation.

Charlie Swanson: Talk to me about how you went from a fan of grindhouse movies to working in the industry.

William Lustig: Well, I started working in the industry when I was in my teens, so there wasn’t really a long transition between fandom and actually working on movies. I’d been a horror fan for as long back as I can remember, and I sort of started working in the business at the time when the ‘70s grindhouse movies were being released.

CS: How did you meet and befriend Joe Spinell?

WL: I met Joe Spinell when I was working as a production assistant on a movie called The Seven-Ups, and Joe was playing one of the thugs, and he was one of the most approachable actors on the set. We started talking about horror films, and like any horror film fan will know, when you meet a fellow horror film fan you immediately bond. So for many years, my goal was to be a filmmaker, and Joe and I stayed in contact.

We wanted to work together, and had tried to raise money from investors and were always frustrated, so we pulled our money together-myself, Spinell and Andrew Garroni- a grand total of $48,000¬–and we went out and shot Maniac.

CS: What first drew you to the story of Maniac?

WL: Well, first thing was I always believed in Joe and his talent. Having a horror film where he’s the focus of the movie is exciting to me. And Joe was fascinated by serial killers.

You see the ‘70s are what I call “the golden age of the serial killer.” Now a days serial killers are kind of boring, you see them on ‘Investigative Discovery,’ and it turns out to be the next door neighbor, or the creep down the street, but back in the ‘70s we had Ted Bundy, we had David Berkowitz, you know all these people that were really colorful serial killers. They were flashy for their day, so we had the idea that the central character would be a compilation of these killers. 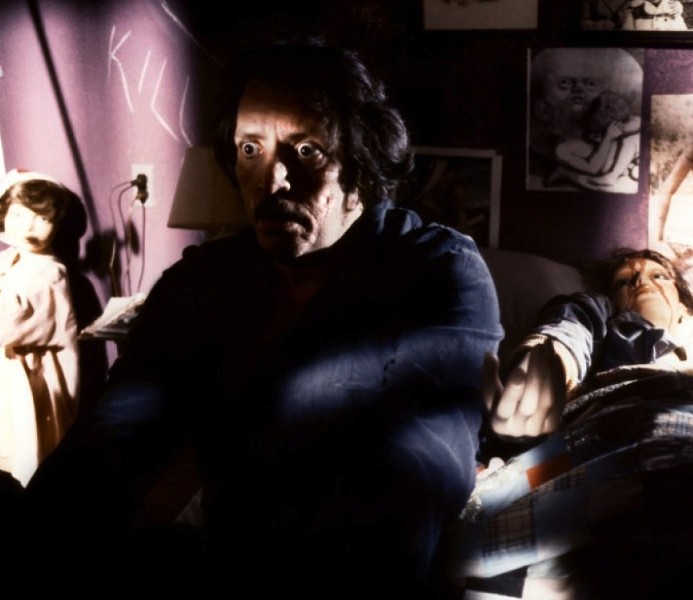 Eric Ritz: I have a question regarding Spinell. At this point he was–not a star–but he was a recognizable face…

WL: Oh definitely, he was making serious coin as a character actor. In fact, what really showed me Joe’s commitment; obviously we weren’t taking salaries out of this movie, but Joe turned down $10,000 a week doing a Spielberg-produced movie, directed by Robert Zemeckis, called Used Cars. And it was because he was committed to Maniac.

ER: Was there any concern, because Maniac is a pretty harrowing movie, was there any worries that this would ruin anything he had going?

WL: You mean was he concerned for his image? The answer is no, and back then, you know Maniac might be a little extreme, but it wasn’t that much more extreme than Friedkin’s Cruising. People were making movies that were kind of out there. It was not a conservative period as far as filmmakers were concerned. In the public there was the rise in conservatism, but not in the industry.

ER: So Spinell just wanted to double down and be in Cruising and Maniac.

WL: He was! Literally, his check from Cruising went to finance his portion of Maniac. He signed it over, it right into our bank account.

CS: When you were shooting Maniac, did you have any idea it would go to Cannes and be this lasting, controversial film?

WL: Joe Spinell had an expression while we were making the movie. Now, Joe was very respectful of me as the director, he would also smoke pot and have some vodka, but he never was difficult or out of control. He was always there and present. And what he used to say to me in my darkest days making the film, because when you’re making a movie for $48,000 there are plenty of dark days, he would say, ‘Bill, we’re making a happening. You don’t know it, but this movie is going to be an event.’ I would be going ‘Yea Joe that’s great. Let’s just play 42nd St and Texas drive-ins and I’ll be happy.’ Sure enough, he was right. He really saw it, he saw that this movie would become, I have to say, a classic.


CS: You followed up Maniac with Vigilante, can you tell me how that came about?

WL: I’ve always had a passion for the European spaghetti westerns and crime thrillers. I always thought they had an edge to the American crime thrillers post- French Connection/Dirty Harry/ Death Wish period. The films in Europe were rougher and more violent, more aggressive and very stylized; versus the American films that in many instances were almost TV-movie like. So, I decided to make an urban retribution film in that style and kind of thought of it as a cowboy and indian movie, with blue-collared people trying to survive in their neighborhood fighting against gang members.

ER: Did you have actors Robert Forster and Fred Williamson in mind for the movie?

WL: Actually both those guys were replacements for actors that either we let go or who dropped out, and it turned out to be the best thing that ever happened.

WL: I know! It was one of those things.

ER: And working with Robert Forster would be a continuing theme with both you and Larry Cohen (writer of Lustig’s Maniac Cop) for the next 15 years or so.

WL: Well you know Bob is a dear friend. And it came from working on the film together. I always love working with Bob. You know I introduced him to Quentin (Tarantino) and Quentin used him in Jackie Brown. It’s all interconnected.

CS: Let’s move on to your company Blue Underground, restoring and releasing cult films. Tell me about the passion you have for that now.

What happened with Blue Underground was there were a bunch of movies that I felt were neglected. There was Criterion giving tender loving care to the Fellini movies, the Truffaut films. And rightfully so. But there was nobody who was giving that same kind of attention and care to pop culture. And that’s where I saw my niche, giving pop culture movies that same attention and respect.

CS: Can you tell me a little about the process of restoring these films, are you finding them in poor shape and starting from scratch?

WL: Yea, it’s sad because, the negatives-all these movies were shot on film- the negatives are deteriorating. In one instance, a negative was completely destroyed during Hurricane Sandy, and now it is gone forever.

WL: Fight for Your Life, with William Sanderson. I’m currently doing the restoration for that, and I’m doing it with what materials exist. After I did a first digital transfer of the film, I sent the negative back to the licensor and they put it in their basement, and that negative was washed away.

The thing about it is, at least the studios have started doing this “burn on demand” service. We’re fortunate that studios are digging deep in their catalogue, probably because of TV stations like TCM, which support the cost. I think Warner does it correctly, and so does Sony; but FOX is an abomination. I hate FOX for this; with all their money they can’t really preserve their catalogue movies? It’s just terrible.

CS: Are you all right with us printing that?

WL: Yes! I hope you do, and I hope it resonates with them. I think they really need to get it right.

ER: Well I love that Blue Underground as a company has lit a fire under this movement. Has it gotten more difficult to secure the rights to these films you want to release?

WL: Well, definitely I spawned competition. I know I did. Shout Factory, Kino Lorber. But I’ve come to realize they’re in a different business that I’m in. They secure rights to studio films, and I honestly don’t know how they make any money doing that. They are short term, high royalty license deals, but I guess they get their releases into the big box stores and make money. I’m not in the big box store business. I’m in the collector business.

CS: So, you’re bringing Maniac and Vigilante to Santa Rosa…

WL: I’m so excited for it, I don’t know if you guys know, but I’ve been vacationing there two or three times a year for the last five years. I go to the Summerfield and the Raven. I love it; I go there all the time. I’ve also been to the Rio Theater a few times, I love that place. I love it up there, man. I want to give a shout out to some of my favorite restaurants. Hole in the Wall in Sebastopol, and Howard’s Station in Occidental. People can find me there, either one, for breakfast.

CS: What are you most excited about for the screening itself?

WL: This is the premiere screening of the new Digital Cinema Package (DCP) of Maniac and Vigilante. This is not going to be some DVD playing, we actually made full blown DCPs of both films, I literally just made them this month, and this is the very first time they are being shown. I’m going back and making DCPs of my films. DCPs are optimum quality and it makes the movies more accessible for theaters to afford to play them. The quality should be outstanding; I haven’t even seen them yet so I’m going to be in the audience watching with everyone else.