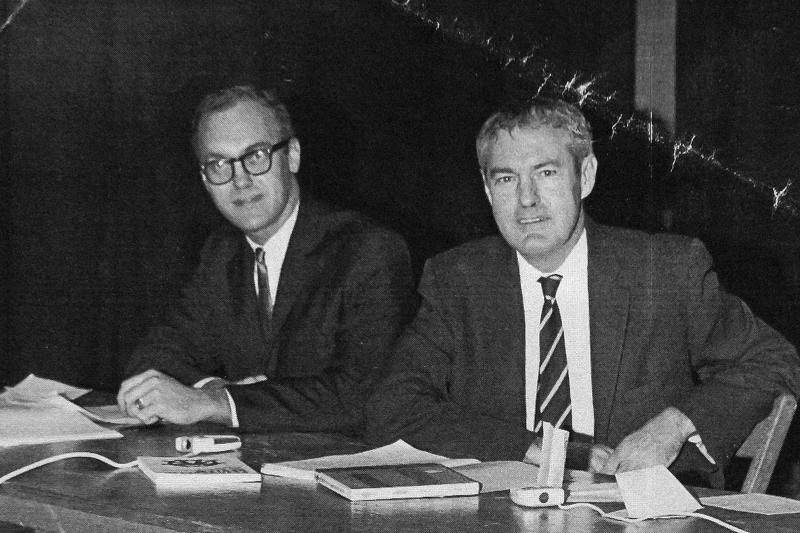 In the 1960s, two Harvard professors would meet and begin an exchange of life-altering ideas, and perception-altering drugs, in a journey that bent the edges of reality and human consciousness. They were Timothy Leary, the counterculture icon who publicly advocated for LSD, and Richard Alpert, the spiritual teacher later known as Ram Dass.

The new documentary film "Dying to Know" chronicles the long and heartfelt friendship between these two revolutionary thinkers that helped shape a generation. Director and producer Gay Dillingham has been fascinated by the dynamic between Leary and Ram Dass ever since she was allowed to capture on film their last encounter in 1995, after Leary publicly announced he was dying from prostate cancer. Finally completing the film last year, she screens "Dying to Know" in person on Friday, July 15, at the Rialto Cinemas in Sebastopol.

The film acts as a portal into the close-knit relationship between Leary and Ram Dass. In an interview, Dillingham shares their story and its universal themes of life, death, and everything in between.

"I was born in 1965, so I didn't live through the Harvard years," says Dillingham. " But I certainly rode the wave of that influence." In the '60s, Leary's experiments with psychoactive drugs like LSD signaled what the director calls a "breaking open of society" that was propelled further by Leary's friendship with the brilliant, grounded Alpert. "They really formed a team," says Dillingham. "The power of their friendship and collegial partnership was truly what started the way this particular modern era uses medicine to expand consciousness."


"To me it felt like this archetypical conversation between the mind and the heart," says Dillingham. "I have those conversations going on inside me and I figure other people do too." At it's core, "Dying to Know" is a story about what it means to be human and to confront life and death's most daunting aspects. She explains that everyone who has seen the film takes away something different, interprets the themes in their own way. It's a testament to the emotional power of film.


From that initial recorded meeting in 1995, Dillingham put the project down for many years to start and run an environmental technology business and to try to help implement climate change regulations in her home state of New Mexico. Once her appointment in the state's government ended in 2010, she re-focused on the project. In 2012, she showed a rough cut of the film to actor, fellow environmentalist and friend Robert Redford, who was so enamored with the subject that he agreed to lend his voice to narrate the film.

As Redford guides the film's journey, rare archive footage and personal interviews with Leary and Ram Dass create lasting moments of honesty and love between the friends. "Dying to Know" does largely center around the topic of death, a subject that our culture to this day tries to collectively deny as an aspect of life. Yet, as the film observes Leary and Ram Dass spend a lifetime exploring these difficult ideas, the film leaves a positive message of love and life.

Director Gay Dillingham and special guests will be on hand to engage in conversation when "Dying to Know" opens on Friday, July 17, at the Rialto Cinemas, 6868 McKinley St, Sebastopol. 707.525.4840.