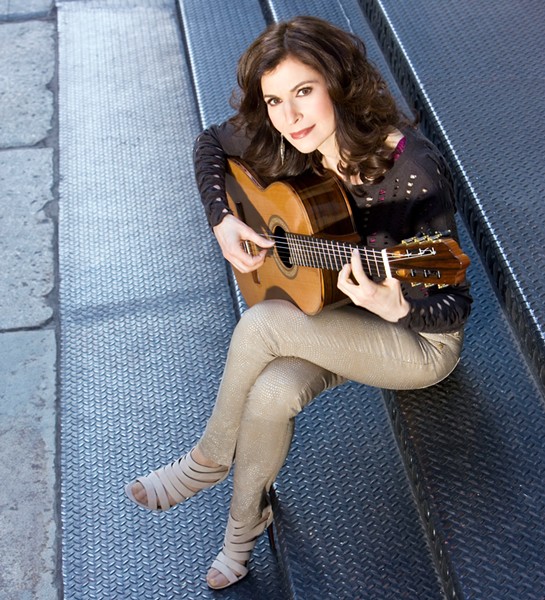 Had enough of logging onto Facebook Live for all your stay-at-home concert needs?

Recorded in November 2018 at the acoustically immaculate Weill Hall at the Green Music Center in Rohnert Park, the concert, “Dancing Across Time,” features the Santa Rosa Symphony, led by conductor and music director Francesco Lecce-Chong, performing musical selections as varied as “Dances of Galánta,” a 1933 orchestral work by Zoltán Kodály; “The Mephisto Waltz No.1” composed by Franz Liszt in 1859; and Leonard Bernstein’s Symphonic Dances from West Side Story, extracted from his own musical score in 1960.

Isbin joined the symphony for the 2018 concert to perform the “Guitar Concerto,” written by the Brazilian composer Heitor Villa-Lobos in Rio de Janeiro in 1951. A multiple Grammy-Award winning guitarist, Isbin has been acclaimed for expanding the role of the guitar in classical and contemporary music, earning her Guitar Player magazine’s Best Classical Guitarist award.

In addition to this weekend’s broadcast, Isbin is premiering two new recordings of works. One album, Affinity, features multi-faceted works created by leading composers from three continents. Isbin’s other new album, Strings for Peace, is steeped in the North Indian classical tradition of ragas and talas, with help from sarod-master Amjad Ali Khan and his virtuoso sons Amaan and Ayaan Ali Bangash.

In addition to the May 24 KRCB radio broadcast, Santa Rosa Symphony is keeping up with the community through a series of other online offerings. Francesco Lecce-Chong, who took over as the Santa Rosa Symphony's fifth music director in 91 years with his first full season in October 2019, is hosting live watch parties on his Facebook page, (I know, Facebook is still the main source for online events), where he touches upon several educational and musical topics.

The maestro has also created three music playlists on Spotify with some of his favorite compositions by Mozart, Beethoven, Brahms, Vivaldi, Prokofiev, Mahler and more. Find those playlists now and check back often; they are updated every week.

Also available for your listening pleasure, groups from the Santa Rosa Symphony Youth Orchestra recently collaborated on a virtual performance, featuring the world premiere of Michael Murrin’s “Fuel for the Soul,” which was commissioned by the youth orchestra to celebrate its 60th anniversary. That virtual chamber concert, sponsored by Santa Rosa’s Stanroy Music Center, features a whopping 14 separate chamber groups from the youth orchestra performing various selections, and the whole video can be seen on Santa Rosa Symphony’s YouTube channel.