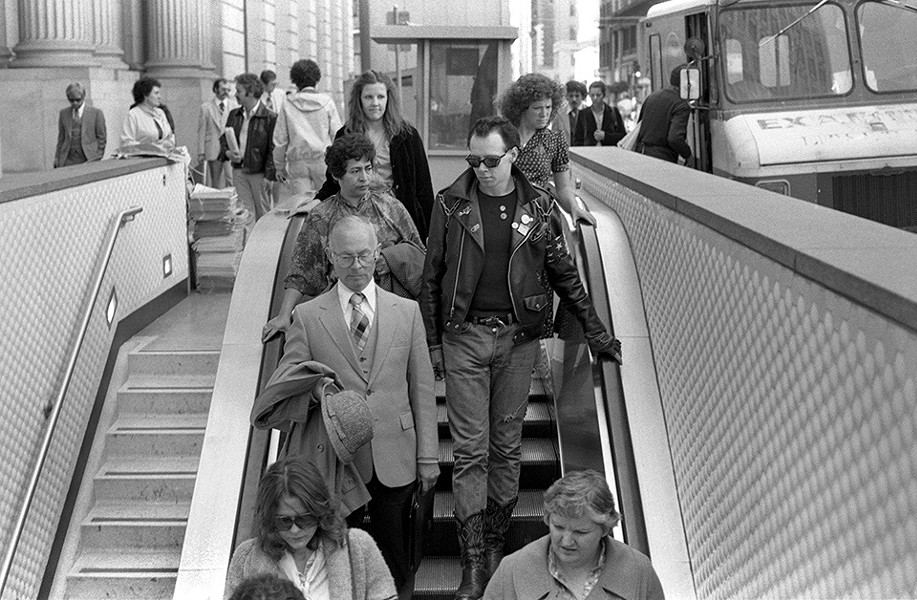 “In the 1980s, San Francisco grew blander, wealthier and more corporate almost by the day, but a resilient multi-cultural underground thrived in nooks and crannies.”

The show, originally scheduled to open at the San Francisco Main Public Library’s Jewett Gallery this month, looks back on the city’s ’80s punk scene with intimate and grandiose black-and-white images taken at the time by Jeanne Hansen that are paired with recollections from the subjects as told to Raskin in interviews over the last few years. Raskin also wrote the introduction for the show.

“It was very interesting for me to find out about San Francisco and this underground culture in the 1980s,” Raskin says. “This was a way for me to get connected to a generation that was not my own generation, and to see the way that counterculture gets reinvented as each new generation comes along.”

Luckily, almost all of the individuals Hansen photographed in the ’80s were still alive to tell their stories, and they all still embody their younger, DIY personas in their work and their ethos.

Those subjects include Stannous Flouride (real name Kevin Kearney), who now works as a local historian leading Haight-Ashbury walking tours. Back in the day, Flouride worked the door at punk venues like Deaf Club and Target Video and was part of the Suicide Club, a group of urban spelunkers who went on outings at abandoned sites in the city.

Raskin writes the interviews from a first-person perspective, allowing each “Alternative Voices” subject’s personal experiences to come through in the writing as well as the photos.

“At first, I wasn’t sure about the title of the exhibit, because it started with the photographs,” Raskin says. “Though I think the two of them, the photos and words, go really well together. It’s a good combination.”

Raskin’s main challenge in writing these 500-word stories was the editing.

“Some of these people’s interviews started as a manuscript with, like, 10,000 words,” he says. “I was really wrestling with the text to get it down to a manageable length while being true to the people and using some of their language and their expressions to keep them as distinct individuals.”

Of the sample interviews that are available to view online now, Raskin’s words paint detailed and imaginative memories from people including Mia Simmons, leader of punk band Frightwig, whose story includes gems like this paragraph:

“In the ’80s we could work our crappy little jobs and get minimum wage, which was, I remember, $3.25 an hour at the Egyptian and the Strand on Market Street. Our studio was opposite the Sound of Music; we had to carry our equipment at three a.m. downstairs in spiked heel shoes and really blotto drunk.”

In addition to revealing details about the city in the ’80s, the interviews also tell the story of how San Francisco remained a hub for creative and nontraditional people after the ’50s Beat movement and the ’60s hippie movement, as all but one of the exhibit’s subjects were San Francisco transplants who moved there from across the country.

“It’s about people who want to spread their wings and do something different and not be knocked down the way that can happen in so many other places in the country where there’s more conformity than in San Francisco,” Raskin says.

“Alternative Voices” is available to view online now, with an in-person exhibit opening at the San Francisco Main Public Library at a later, so far undetermined date. Visit sfpl.org for more details.