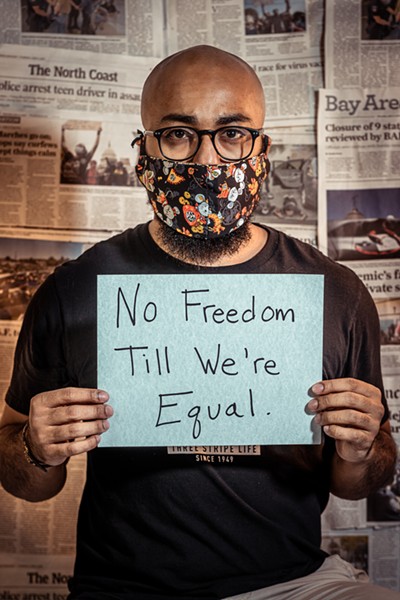 For the last two weeks, peaceful protests around the North Bay and around the country have dominated headlines, as scores of citizens have taken to the streets to demand major changes to policing and to renew the call that “Black Lives Matter.”

In Sonoma County, thousands of people have marched in Santa Rosa, and hundreds more have made their voices heard in towns like Healdsburg and Sonoma.

Now, Sonoma County-based FTA (For the Art) Productions–formed by actor Carmen Mitchell and photographer Marcus Ward–is offering an additional way for locals to participate in these demonstrations with a Peaceful Protest Portrait Project.

FTA Productions kicked-off the protest art project last week with a Black Lives Matter curbside photo booth in Healdsburg, where approximately 75 people showed up with signs and face coverings. Ward took individual and group portraits of protesters that can be viewed online now and will be turned into a large mosaic collage at a later date in support of the Black Lives Matter movement.

FTA Productions is organizing a second photo booth event this Saturday, June 13, at Brew Coffee & Beer House in downtown Santa Rosa. Given that June is Pride month for the LGBTQIA+ community, this upcoming photo booth will continue supporting the BLM movement against police brutality as well as celebrating the lives of queer Black people and the Pride movement.

FTA Productions co-founder Carmen Mitchell is a Sonoma County native who grew up as a competitive figure skater and ballet dancer, training at Snoopy’s Home Ice and the Santa Rosa Dance Theater respectively. She skated professionally with 'Disney on Ice' for many years and now works as an actor and singer, founding nonprofit Redwood Theatre Company in Healdsburg.

Mitchell recently moved to New York City to pursue musical theater, though the Covid-19 pandemic shut down the arts industry there and everywhere else in the country. “All of my friends in the arts became unemployed overnight,” she says.

Back at home in Sonoma County until the entertainment industry reopens, she found herself surrounded by other North Bay artists also stuck in the same predicament.

One of those artists is FTA Productions' other co-founder, Marcus Ward, who works as a freelance photographer and dancer in Sonoma County. Last month, the two friends found a communal inspiration to add to Sonoma County’s peaceful protests through their art.

“We started with a few portraits of our friends in the dance community here in Santa Rosa, and it just grew,” Mitchell says.

After Mitchell and Ward hosted the first protest photo shoot at the black-box Redwood Theatre Company in Healdsburg on June 5, Mitchell says that Brew Coffee & Beer House got wind of the project and offered to host the upcoming Black Lives Matter and Pride photo booth on June 13.

“We’re providing the paper, pens, everything for people, they just need to come with a mask,” says Mitchell. The upcoming photo event will also have a video component where Ward will record people delivering their personal messages of protest.

Mitchell points out that the protest art project is more than a two-person operation, and she credits fellow organizers Desmond Woodward, Alleya Torres and Eddie Melendéz for making the project a success.

“The definition of art is to hold a mirror up to humanity, it is a reflection of society,” Mitchell says. “This is very personal for me because I grew up in a Disney filter. For the first time, I feel like I’m tapping into powerful art that is more than just commercial.”

Mitchell wants to assure protesters that the project is not trying to lessen the importance of the Black Lives Matter movement by incorporating the Pride element in this weekend's event, but rather the group is focused on how the two communities intersect. “Queer Black Lives Matter also,” she says. “We’re trying to incorporate the celebration of Pride and equality.”

Mitchell also notes that this project is not meant to replace the marches and gatherings that are happening every day, but to bolster those movements. “We are trying to create a safe space where everyone is welcomed to participate in art without judgment,” Mitchell says. “There’s so many ways to take action, this was our way of hitting the pavement, and we’ve got some backlash hate from it, but it's ok. We are trying to do better in creating community support and awareness through art.”