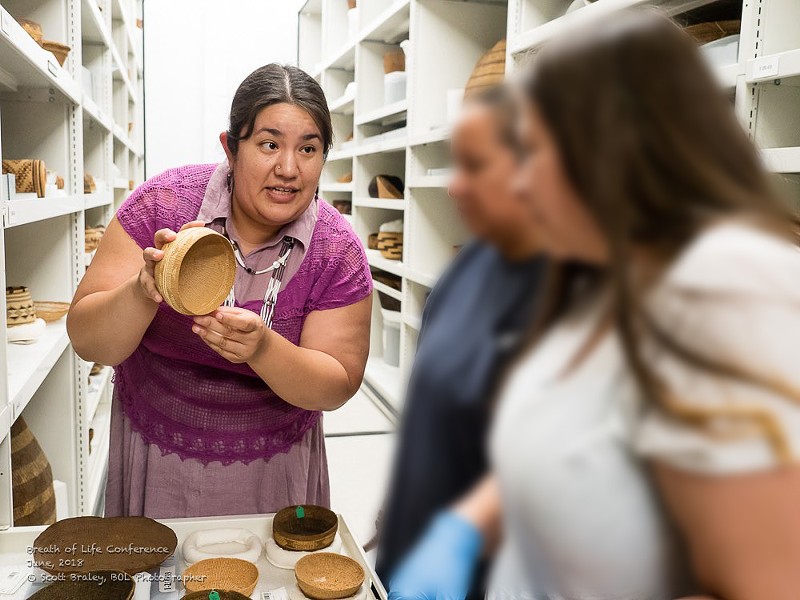 For decades, a group of Native activists and language experts have convened at the University of California, Berkeley, to help preserve and revitalize more than 100 individual native Californian languages.

Hosted by the nonprofit organization Advocates for Indigenous California Language Survival (AICLS), this biennial gathering is dubbed the 'Breath of Life’ conference, and while the event could not take place this year due to Covid-19, the public can get an in-depth look at the painstaking work that Native Californians do to keep their tribal languages alive in the half-hour documentary film, Breath of Life: Revitalizing California Languages.

The film airs in the North Bay on Northern California Public Media’s KRCB-TV for Native American Heritage Month on Sunday, Nov. 8, at 2:30pm. The film also airs in the South Bay on KPJK-TV on Nov. 11 and Nov. 14 at 9:30pm and 5:30pm respectively.

Breath of Life is the sixth self-funded film from Emmy Award-winning independent producer Rick Bacigalupi, who has partnered with the Oakland Museum of California to create the film. Bacigalupi is best known for his work on programs and films like “Bay Nature on the Air” and “Only in the Castro with Trevor Hailey” that highlight the region’s ecological and cultural diversity, and his credits also include contributing to NorCal PublicMedia’s monthly “Bay Area Bountiful” program.

In this film, Bacigalupi covers past Breath of Life conferences and the AICLS’s other work in telling Native peoples’ stories in their own tongues.

AICLS board member Vincent Medina (Chochenyo Ohlone) opens the documentary by stating, "We haven't had a native Ohlone speaker in about 70 years. That's not to say we don't have speakers now—I consider myself to be one of the first new generation of fluent speakers in our language, which is exciting."

Today Native California peoples' story is emerging as one of persistence, revitalization and pride. Yet, no accounting of their experience is complete without acknowledging the atrocities of the recent past, and the film follows the Breath of Life group on a field trip to nearby Mission Dolores in San Francisco and a tour of the adjacent cemetery containing 5,000 unmarked native graves.

Despite showing the pain of past persecution, the tone and outlook of Breath of Life remains optimistic. The film shows how the conference participants work with noted visiting linguists like Professor Pamela Munro from UCLA, and Professor Catherine Callaghan from Ohio State, a foremost authority on Miwok languages since publishing her thesis in 1963.

The film also demonstrates the challenging and emotional experience that native speakers go through in rediscovering and speaking their cultural languages, and it also takes time to watch presentations given "in language" on topics that range from hilarious personal stories to singing the "Hokey Pokey" translated into Tongva, a Southern California language.

The next Breath of Life conference will take place in 2022. Until then, the AICLS will continue to host events and activities on online platforms such as Zoom, Facebook and YouTube.