Labor Day Weekend Wine-and-Bites Ballyhoo in Healdsburg, with the Crew

Hello and welcome to your post-Labor Day Fishing Report. I had the good fortune to get invited with some of the Bohemian crew to the Taste of Sonoma event up at MacMurray Estate Vineyards in Healdsburg, on Saturday over the long weekend. The even was part of the three-day Sonoma Wine County Weekend. Glad I went. My colleagues from the sales department, Augusto Leon and Lisa Santos, Lynda Rael and Rosemary Olson, made for a delightfully fun and easygoing afternoon nestled among the sublimely beautiful vineyards and hills of Healdsburg.

There were a few highlights along the way. I grabbed a bunch of business cards as I worked through the variously packed tents to try and keep them all straight, and also took a few opportunities to find a quiet spot to take it all in. The MacMurray grounds are vast and it wasn't too hard to find some uncrowded space in the shade, in the grass, on a haystack, from whence to observe the goings-on in a spirit of bemusement and the eternal frolic.
I had a few sips of Pinot Noir from various vineyards (am I really supposed to recall all of them? There were over 200 represented here).

There were many enjoyable bites on offer paired with the wines, which included a fine square of seared albacore tuna in a paper ramekin; a tidbit of tri-tip on toast, fried balls of mac-and-cheese, and salty oysters on the half, courtesy of ace shucker-servers (and our friends), the Oyster Girls. The latter was featured in the so-called "Bubble Lounge," where there was a bubble machine and lots of bubbly refreshments from Gloria Ferrer Caves and Vineyards.

Elsewhere, a cup of butterscotch pudding emerged from the Patisserie Angelica, in Sebastopol. Banned cliche alert: it was to die for.

Sazon, the Peruvian joint in Santa Rosa, put out a ceviche that was accompanied by one of the great plaintain chips of the 21st Century. Meanwhile, Santa Rosa's Belly offered up some rich morsels of fatty pig belly—another memorable micro-bite down the gullet with barely a pause to reflect that I was supposed to go no-pork-on-my-fork in my 48th year. Tomorrow. Besides, where's the fork?

Disappointments were few and far between. I saw one woman of quite sophisticated affect gnawing on a nice big beef rib and was almost moved to rip it from her fist. Never did find those ribs. The heaviest conversation I got into all afternoon concerned my attire, and the apparently unforgivable faux pas I committed: I wore white linen to a wine-tasting event. For shame! I did slobber a sauced-up strand of ramen noodle all over it within 10 minutes of arriving, which is why we have dry cleaners.

My coworkers crowed over multiple varieties of caviar on a cracker in the Bubble Zone, and we all enjoyed music performed by a bunch of bearded hillbillies, who should change their name to just that: A Bunch of Bearded Hillbillies.

As the day wore on, the wine was decanted, and people started to enter their prospective and proverbial cups, a generalized swoozy uptick in the energy level was discerned. This was punctuated at the end of the event, near the shuttle-bus stop, by a man who announced, loud and proud and to no-one in particular, that his next stop was San Francisco for a Billy Joel concert that night.

His fragrant outburst reminded me how Joel had memorably wrapped his car around a few unlucky trees in the tony town of East Hampton, New York, over the years. I did not mention this to the man or to my colleagues, but merely note the outburst to highlight the insistence by which Taste of Sonoma does not want their attendees to wind up in jail on a DUI.

The drill here is lots of designated drivers and shuttle services from points all around the region to this event and the two others that flesh out the Taste of Sonoma Weekend.

Me, I had a few sips of Pinot Noir and then switched over to iced coffee.

My overall impression? As a relative newcomer both to California and these sorts of epic and iconic events centered around wine, my takeaway is that organizers of this vast, three-event fund-raising blowout across the county really have the logistics down cold. It's just a fantastic event, and this year they raised more money than ever, $4.5 million for underprivileged Sonoma kids, at the Sonoma Harvest Wine Auction that went down on Sunday. The event had kicked of Friday at the Coppola vineyard in Geyserville.

Given that the MacMurray event on Saturday was attended by thousands of people on a hot day, bellies bursting with wine by the end of it, there would seem to be ample opportunity for parking-lot beat-downs or other besotted meltdowns. I frankly wish I'd seen one or two of those. I love that kind of stuff, especially when it doesn't involve me.

Yet the event went down as smooth as those few last silky drops of Pinot Noir swirling down yonder in my glass. 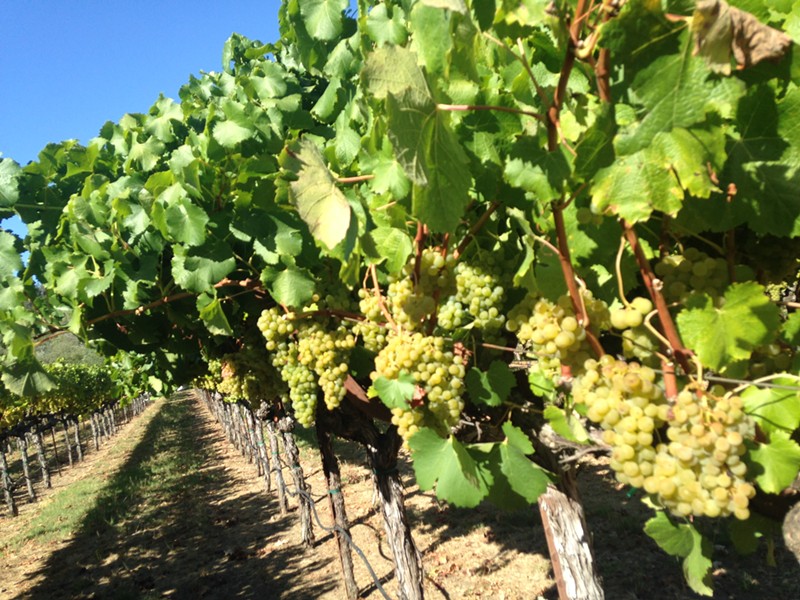