December 22, 2015
1 comment
Gov. Jerry Brown got an interesting award this week from an organization called the Information Technology & Innovative Foundation, which awarded Brown one of its annual "Luddite Awards" for his veto this year of a proposed bill that would have put 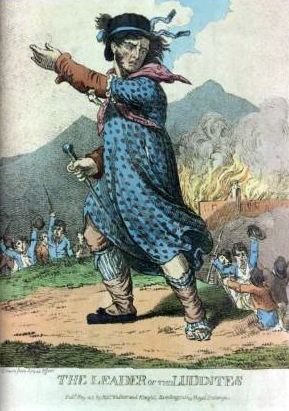 The ITIF isn't just some pro-technology organization that loves its gadgets and techno-geegaws. it's a K Street firm in Washington D.C. that recently hosted the likes of Bruce Mehlman as a speaker, and lists him on their webpage as an "unaffiliated expert." Mehlman is a top Washington lobbyist and a former commerce official in the George W. Bush Administration—which lobbied hard for RFIDs when it was in power.

Mehlman also worked for Cisco as the tech giant's lead Republican lobbyist and, according to a dummy sheet from ITIF that highlighted his recent appearance, represented the Silicon Valley firm before congress, federal agencies and the executive branch. Cisco is up to its all-seeing-eyeballs in the RFID industry; it has provided the tracking technology to support RFIDs in places as far-flung as India.

The ITIF dismissed as overstated the privacy concerns that drove Brown to veto the RFID bill last year, even as privacy proponents blasted a bill that would have forced Californians to agree to have unencrypted computer chips embedded into their driver's licenses. The ITIF list of winners gave some insight into the sensibilities of the firm. It made chum of the America-hating linguist Noam Chomsky for advocating a ban on "killer robots," while slamming all of Europe and China for not going the way of Uber and Lyft and "choosing taxi drivers over car-sharing passengers." And the ITIF gave an award to the Center for Food Safety for fighting genetically "improved" food.

The RFID bill Brown vetoed followed on a Department of Homeland Security push for the technology 10 years ago. But the same problems that plagued RFIDs then are still in play, wrote Kevin Baker of the Northern California branch of the American Civil Liberties Union, in a blistering online takedown of the bill as it wended its way to Brown's desk.

"Experts warned that this technology was insecure ten years ago, when DHS under President Bush first introduced the licenses," wrote Baker. "Back then, DHS admitted that the personal information stored in these chips could be read from a distance of up to 30 feet. In fact, a security researcher built a reader with $250 in spare parts, drove around downtown San Francisco, and proved how easy it is to read and copy these documents—without anyone ever knowing or even suspecting their information was being skimmed. Sound creepy? That’s because it is. This technology is a dream come true for identity thieves and stalkers, and a civil liberties nightmare for Californians concerned about government intrusion and tracking."