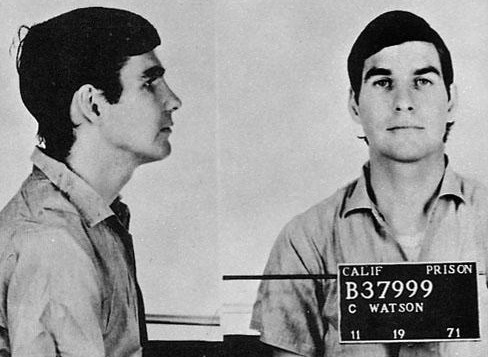 Charles Watson sounds a lot cooler when you put the “Tex” in the middle of it, but that’s how people remember the horribly notorious Charles Manson-ite, Charles "Tex" Watson, who was in the headline scroll of the L.A. Times this week when his parole was denied by the California Department of Corrections, for the fifteenth time.

Watson was convicted in the 1969 Tate-LaBianca murders and was sentenced to death (along with Manson himself) at the end of 1971. California ended capital punishment in 1972 which meant Watson's sentence was commuted to life with the very remote chance of parole. In his case and for all intents and purposes, that is likely a zero chance of parole, given the notoriously evil bent of Watson and the Manson Family's 1969 murder spree. Thirty-five years after being incarcerated for his participation in the seven murders, Watson has become an ordained minister with his own church, and a college graduate with a business degree. He got married and had three kids. All while in prison. After this latest parole denial, Watson won't go before the board again until 2021, when he'll be 75 years old.

Seeing Watson in the headlines reminded me of how edge-culture purveyors of Generation X, myself include and deplorably so, were kind of fascinated by Manson. As a young lad just out of college in the early nineties I bought the Manson album, Lie, that had all those earnest, scratchy, weird-folkie songs on them. There was also the Manson connection to the Beach Boys' Dennis Wilson, very intriguing. And I bought the Dec. 1969, Life Magazine with Manson on the cover at some little shop in eastern Vermont, roundabout 1990—The Love and Terror Cult! I'm kind of ashamed I did nowadays, but recently I pulled “Garbage Dump” off the Youtube at the office and the officemates thought it was kind of catchy. It's Manson. He gave “The Sixties” a bad rap for the generation that followed and Watson was an arguably even bigger psycho, if actions speak louder than forehead swastikas and bizarre interviews with Geraldo Rivera.

I went to San Quentin early this year and while I did not spot Charles Manson, I can readily report that there is no fair shortage of psycho killers among the 700-plus men on the three tiers of death row. But there are also redeemable men, and there may even be men who are not guilty of the crime that put them there. This is not an unusual occurrence.

This year Californians will vote on whether to end the death penalty outright (Proposition 62) or quicken the appeals process to speed up—to kickstart—the executions (Proposition 66—or, The Number of the Beast, Minus 6). In our upcoming issue we’re endorsing a bunch of things and one of them is Proposition 62, the repeal initiative that would commute all the current capital sentences to life-without-parole. So that, for example, someone like Tex Watson doesn’t waste taxpayer time and money with 15 fruitless attempts to be a free man again, after already having been found guilty for crimes For Which There is No Parole But God.

Forget that. And forget Prop 66, which contains some downright creepy language that’s nevertheless totally unsuitable for Halloween: Proposition 66, if enacted, “Exempts prison officials from existing regulation process for developing execution method.” The condemned are hereby instructed to check all apples for razorblades.