Huffman Signs On for Impeachment 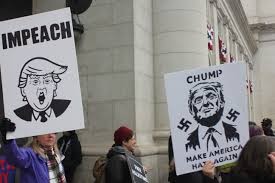 U.S. Rep. Jared Huffman has signed on as a co-sponsor to Articles of Impeachment introduced in Congress against Donald Trump, his office reports today. The articles have been written up by Tennessee Democrat Steve Cohen, who is the ranking member of the House Judiciary Subcommittee on the Constitution and Civil Justice. The articles lay out five areas where the lawmakers say Trump has abused his power, as it hits on collusion, corruption and the reality-show president’s violently mocking disdain for the fourth estate, especially when it comes to his obsession with female news anchors' bodily fluids.

The North Bay Democrat says in a statement:

“Every member of the House of Representatives pledges to support and defend the Constitution of the United States when we are sworn into office. That carries with it the responsibility to provide checks and balances on executive power, and in exceptional circumstances, to impeach a President who has violated the law or abused power to the serious detriment of our country.”

“I’m cosponsoring Rep. Cohen’s articles of impeachment because they focus on the most serious and egregious examples of President Trump’s impeachable actions—his obstruction of justice, his unprecedented conflicts of interest, his unwillingness or inability to credibly and forthrightly address Russia's interference in the 2016 election, and his recklessness with matters of national security. President Trump has shown contempt for the institutions and safeguards that are essential to the rule of law and the proper functioning of our democracy. That is precisely the situation that the rare remedy of impeachment was intended to address.”

Here’s a summary of the articles of impeachment: