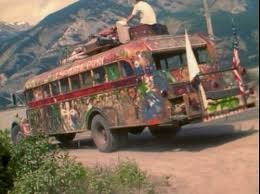 The California Air Resources Board is meeting this morning in Sacramento to hear expert testimony on a proposed rule that would mandate a statewide zero-emissions bus fleet by 2040.

The ARB reports that transportation emissions are at their highest levels in ten years—what?!—and today's meeting will zero-in on the board's Innovative Clean Transit Rule, an ambitious effort to electrify buses in municipalities from Chula Vista to Yreka.

Closer to home, Santa Rosa is already on the stick: This week the Federal Transit Administration announced $366 million in competitive grants had been awarded for bus and bus-facility infrastructure projects. California clipped $29 million of the federal greenbacks, including $1.8 million directed to Santa Rosa.

The FTA reports that Santa Rosa will use the money to fund the purchase of zero-emission buses, as the city begins to transition from its stinky fleet of exhaust-spewing buses, to an all-electric fleet of clean, mean, transporting machines. $1.8 million can basically get you two electric buses.

A June 2017 feature on electric buses that appeared in the online Marketplace.org noted that a diesel bus costs around $500,000; electric buses cost about $800,000—but the added cost is offset by fuel savings over the vehicle's lifetime.

Today's hearing in Sacramento begins at 9am and will feature testimony from EarthJustice, Sierra, the Coalition for Clean Air, the Union of Concerned Scientists, and the American Lung Association of California.

Sayeth the ARB: "Experts say California cannot meet its clean air or federal ambient air quality standards so long as the state's vehicle fleet is dependent on fossil fuels," as it notes that the state already has a thriving electric-bus manufacturing industry.

The Marketplace.org report highlighted one of the California companies building the next-gen fleet, Proterra. They've got a good problem, noted the article's author, Andy Uhler: "It can’t build buses fast enough to keep up with demand."