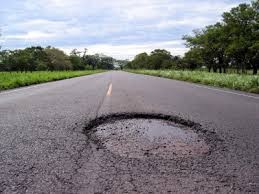 A report out today from TRIP, the national transportation research group, says that Santa Rosa has some of the worst road conditions in the country. The city's seventh on the list of bad-road cities with populations between 200,000 and 500,000, with 43 percent of Santa Rosa's major roads and highways in woeful shape.

TRIP's research found that Santa Rosa automobile drivers spend an average of $776 a year in vehicle operating costs associated with the poor road conditions; the national average is $599. It also reported that among big cities, San Francisco and San Jose take top honors for their poor roadways.

The TRIP report arrives as Santa Rosa residents are asked to support local Measure 0 this election day—and to consider a repeal of the state gas-tax boost set to go into effect in January under SB1. Gas-tax revenues under SB1 are targeted at rebuilding the state's roadways but Measure 6 would repeal the measure.

According to the city website, the League of California Cities estimates that Santa Rosa would receive $2,935,933 in fiscal year 2018-2019. SB1 will eventually send $3.9 million annually in road maintenance funds when fully implemented, reports the city.  That's the good news. "Even with this new funding, we are still left with a shortfall of approximately $10 million annually."

Santa Rosa has a $1.1 billion dollar street system with more than 500 miles of roadway and an average annual maintenance budget of around $5.4 million dollars. The city says that because of deferred maintenance, its Pavement Condition Index (PCI) has declined to 60, "at the line between 'good' and 'fair' condition. Recent evaluation with our pavement management program has concluded that we should be spending at least $18 million per year just to maintain the existing pavement conditions at 60."

Measure 6 sets out to repeal SB1 and been heavily pushed by the state Republican party and gubernatorial candidate John Cox. The GOP recently announced it would run anti-SB1 ads on gas station TV screens to whip up support for its repeal.

The local Measure 0,  or "the Vital City Services Measure" sets out to temporarily raise the local sales tax by one-quarter cent and would raise $9 million annually "to help Santa Rosa recover from the recent fires, rebuild our infrastructure, preserve emergency services such as rapid 9-1-1 emergency response times, and address other critical City needs," according to the city website. The tax lapses after six years.

The crumbling-infrastructure question was raised at a recent Santa Rosa City Council candidate's forum for the newly created districts 2 and 4.

District 2 incumbent John Sawyer said that  if Measure O fails and Measure 6 prevails, "I recommend everyone invest in new shocks."