Winners of the 2013 NorBays and 24-Hour Band Contest 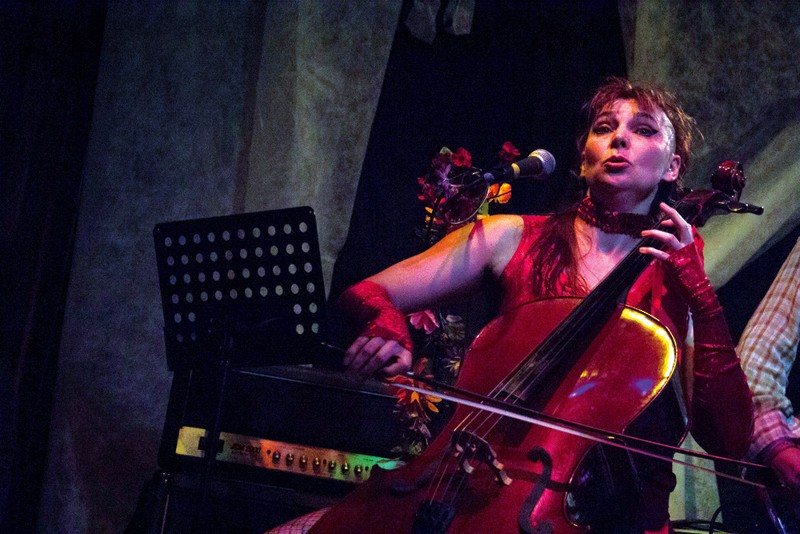 Keith Garriott walked to the center of the stage, assumed a half-squat, tilted his guitar skyward and let loose on a lightning-fast solo. Artemis, in red leather hot pants and lace, stood up from her chair and mangled her cello's strings while yelling along. While Alex Kouninos laid down the bass and Matthew Wilson played ukulele, singer Jeremy McCarten drew out a final "Come ahhhn!" with his head tilted back. Behind the kit, Devon Rumrill thundered out a massive drum roll and clobbered the cymbals, bringing the whole thing to a crashing halt.

In that glorious finale, who would have believed the band had only been together for 24 hours? Up went the judges scores, all 9s and 10s, and with that, a new champion of the Bohemian's 24-Hour Band Contest was crowned.

That was just one of the many high points in the packed Arlene Francis Center last Saturday night, as we carried on last year's crazy idea—to assemble musicians into random bands with other strangers and force them to write two original songs and learn one cover song in just one day. Each performance was like opening a living, breathing Christmas present. A trombone-fueled version of "Psycho Killer." A Spanish-English hybrid of "Rebel Yell," complete with hubcap percussion. A "Taxman" sing-along. Hell, the energy was so high that at the end of the night, people started breakdancing. Ultimately, the panel of judges—comprising Bill Bowker, Leilani Clark, Heather Irwin, Steve Jaxon and Jacquelynne Ocaña—chose the band cheekily calling themselves Wonder Wench as most worthy of top honors.

Making their success even more special was the fact that McCarten, in hospital scrubs, was called in to work at the emergency room the night before; he'd missed five hours of rehearsal. (The "special circumstances" award, though, goes to bassist Huck Reason, from a different band, whose five-day-old daughter Nyah Willow watched from the crowd, wrapped in blankets and held by her mother.)

Not to be outdone, our ninth annual NorBay Awards conferred plenty of honors throughout the night, too. Your voting made it happen—we had 1,047 preliminary write-in voters, and 3,411 finalist voters! Gold record awards were given, speeches both touching and funny delivered, and our commitment to supporting and cultivating local music was strengthened yet again.

The award was especially timely for Lester Chambers, winner in the Blues / R&B category. In accepting the award on behalf of his father, Chambers' son Dylan explained that Lester had been assaulted onstage by a woman earlier that same day at the Hayward-Russell City Blues Festival after dedicating "People Get Ready" to Trayvon Martin. (Video later released showed Dinalynn Andrews Potter climbing onstage, shoving the 73-year-old Chambers to the ground; she was arrested for battery, and Chambers was taken to the hospital.) "I can't tell you how proud he'll be having this," Dylan said, clutching the award. "He works very, very hard at what he does."

Without further ado, the winners of the 2013 NorBays:

Folk / Acoustic: Foxes in the Henhouse

Indie: Grace in the Woods

Burning Token Media was on the scene to document the 24-Hour Band Contest—the choosing of the bands on Friday, the rehearsals on Saturday, and of course, the mighty performances.

Watch the results in playlist form here, or see individual performances below.

Bands, attendees and others at the 2013 NorBay Awards and 24-Hour Band Contest on July 13, 2013, at the Arlene Francis Center

Bands, winners, and more from the NorBay Awards and 24-Hour Band Contest on July 13, 2013 at the Arlene Francis Center