Two years ago, zero tolerance reigned and Latinos made up half of Santa Rosa's expulsions. Now, with restorative justice, going to the principal's office won't ever be the same

For more information on Restorative Resources, including volunteer and training opportunities, go to www.restorativeresources.org or call 707.542.4244. 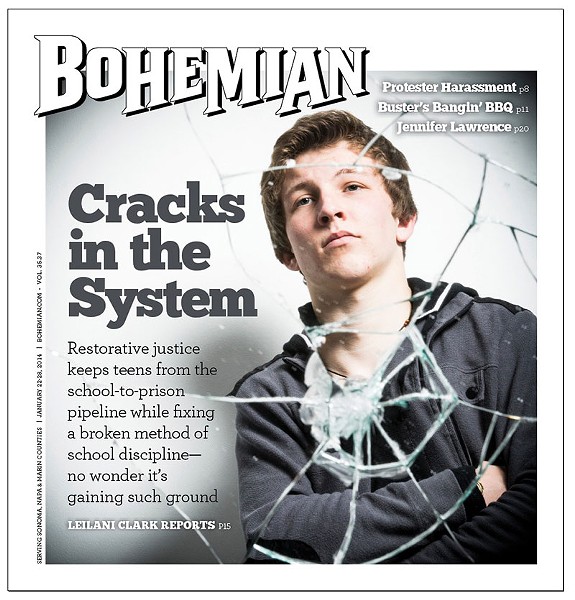 Zac Good first got a taste for stealing in middle school. A self-described screwed-up and troubled child, the Santa Rosa teen started smoking, getting in fights and engaging in competitions for who could steal the most from local stores, just for the hell of it.

"We were jerks to everyone," admits the 18-year-old Santa Rosa High School student. "It gave us something to do that wasn't sitting around being bored. I was always acting out."

He got away with the petty theft and violence for a while—until his junior year, when two administrators suddenly pulled him out of sixth-period culinary class. They'd received a report that he was carrying a knife. Not just any knife, mind you; Good was carrying a four-and-a-half-inch switchblade (along with a second knife and a pack of cigarettes), a zero-tolerance violation that merited expulsion from his Northeast Santa Rosa high school.

He spent three days in juvenile hall and faced a possible misdemeanor charge for having a switchblade longer than two inches. After his release, he received a letter in the mail from an organization called Restorative Resources, asking him if he'd be willing to undertake a 12-week program—also called an accountability circle—in life skills like empathy, compassion, anger management and decision-making. If he completed the program successfully, he could circumvent the juvenile justice court system. Good agreed to give it a try.

"The program covered stuff I knew but didn't take seriously," says the thin, dark-haired teen, wearing jeans and a black hoodie, a silver class ring glinting on his hand. Halfway through the circle, in group work with other teens that had gotten into trouble, his mindset began to shift. He started thinking of his little brother, who was 10 at the time.

"I began thinking about how my decisions would affect my brother, and it was really embarrassing for me," he says. Then he started considering his parents, his teachers and his friends, and how any decision he made, bad or good, affected not only those people but also everyone they interacted with. He wrote letters acknowledging the pain that he caused his parents, his brother, the teacher in his culinary class, the arresting officer, the school administrators that caught him and even his girlfriend at the time. He says writing the letters helped him process the importance of making amends for his actions.

"It's this wake-up call that sticks with you," Good explains. "By the end of the program, you realize that your action was entirely your fault. Responsibility is the first lesson."

Good graduated from the Restorative Resources program in December 2012, and started to turn his life around. He stopped smoking and stealing. He went back to high school (a different one) where his GPA rose from 1.7 to 3.8. He got his driver's license and found an after-school job. He earned the rank of Eagle Scout, which he calls "his proudest achievement in life."

Whereas Good hadn't given any thought to the future before, he now plans to attend the culinary program at Santa Rosa Junior College before earning a business degree—all part of his plan to eventually open a '50s-style soda fountain similar to one his family once owned in San Jose.

"Before, I didn't care about the future," Good says, "and now I'm thinking about how I can go out and be in the world."

Restorative justice has gained much ground in the United States, especially as data increasingly shows that the zero-tolerance approach favored since Columbine is not only ineffective but discriminatory toward minority and disabled students. A new joint report issued by the U.S. departments of Justice and Education, based on data collected by the Civil Rights Data Collection, explicitly states that black and Latino students in U.S. schools have been more heavily disciplined than their peers. The report provides a set of guiding principles that would move districts away from zero tolerance and into a "wide range of strategies to reduce misbehavior and maintain a safe learning environment, including conflict resolution and restorative practices."

Restorative justice programs in the United States have grown exponentially since 2005, according to Thalia González, a professor at Occidental College and expert in restorative practices. Rather than handing out blanket punishments to offenders, the practice requires them to take responsibility for their actions and to make amends—think of a circle instead of a straight line out the door. Unlike punitive tactics, restorative justice emphasizes reparation, accountability and the web of relationships that make up a school and greater community, with the ultimate goal of preventing a reccurrence of the behavior in the future.