A First for Napa 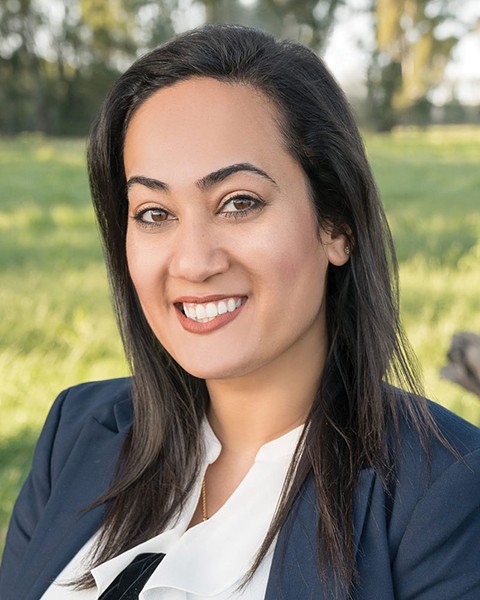 She was elected to the American Canyon City Council in November 2016. Considering the current political climate under President Trump, her insights are brought to bear personally and in her and prevalent in her professional role as an immigration attorney. Born in San Francisco, her family moved to Napa when she was one year old and American Canyon when she was two.

"We've been here ever since," she says. "My parents were born and raised in Jerusalem. We are of Palestinian ancestry, which has always been controversial in and of itself."

BOHEMIAN: What inspired you to run for local office? Were there specific local issues that you felt needed addressing or attention?

ABOUDAMOUS: I began volunteering with the city at the age of 14 in the Parks and Recreation department. When I turned 16, I was hired and began my first job. After college, I became involved in a different way. I was elected to the Napa County Democratic Party Central Committee at the age of 21. I was one of the founding members of the American Canyon Democratic Club (ACDC). Unfortunately, I had to leave my volunteer posts when I moved away for law school, but jumped right back in as soon as I returned.

I have always been a leader and an advocate for the city of American Canyon. Now, I believe that I have a lot to offer and want to continue giving back to the community that made me.

The No. 1 issue that I believe needs addressing is traffic. I was driving home from work one day, which was only five miles away from my house at the time. The drive took me 45 minutes! This is the day that I made my decision to run. If I want to see change, I need to be a part of it and not just complain about it.

Had you served on any local boards or commissions? Do you have any children in local schools?

I hadn't served on any local board or commissions, but I have always been politically active from behind the scenes. I've volunteered a lot and worked on several local campaigns. I do not have any children.

Did being Muslim impact your campaign—did it create any obstacles or provide opportunities?

It's funny you ask that because when I decided to run for office, a member of the community said to me, "But you're Muslim. Is that going to be a problem?" My response to that was, and still is, absolutely not. American Canyon is such a diverse town [that] embraces our differences. I am blessed to have grown up in such a diverse community where my religion is welcomed rather than mocked or criticized.

You were elected, so the community must have liked what you had to say. How do you think you resonated with the voters?

I have lived in this city for a very long time and have always been an active contributor. I played soccer with, was camp counselor for, or went to school with many residents and their parents. People here know me and know my passion for the community. For those who didn't, I made sure to engage in meaningful dialogue with them and truly listen to their concerns.

Do you consider yourself a role model?

I believe that my election has inspired many people to take an interest in local government. I am interested to see how many people run in the 2018 election. I try to always be available to people, especially our youth, who are interested in the campaign and election process.

What have been your biggest accomplishments on the city council?

I believe that the focus of the council has shifted since I've been elected. Now we're having an open and honest dialogue about our traffic issues, whereas before it was mostly centered on parks and recreational programming. Also, I was part of the first ever iftar dinner during Ramadan.

The American Canyon Arts Foundation received some grant funding to host cultural events. I was asked about the Middle Eastern culture, and it just happened to be during the month of Ramadan, so I suggested that we host an iftar dinner. We expected a low turnout of 50 to 75 people and didn't think we would even get that many. We ended up with 130 RSVPs and turned many others away.

We had a guest speaker who is a senior lecturer at UC Berkeley, Dr. Hatem Bazian. He is also a co-founder of Zaytuna College, which is the first accredited Muslim liberal arts college in the United States. After the presentation, we had a call to prayer recital. Then we provided dinner for all of the attendees.

What's your biggest goal as a council member?

My biggest goal is to genuinely make a difference in this community. Traffic is a nightmare here. Even I try to avoid driving on Highway 29 as much as possible. Another goal I have is to be a resource and a role model for our youth. I am a first generation Arab-American and had to learn how to navigate everything on my own. I understand how difficult it is to find support and understand your true potential on your own. I would like to help others, who are in this situation, find their way.

As an immigration attorney, how do you see the current administration's impact? How scary is it for immigrants—and, for that matter, any citizens whose parents came from anywhere but Europe?

I have seen the fear that has been instilled in people from all backgrounds by this administration. The Muslim bans that have been attempted have scared Muslim green card holders from leaving the country for any reason. People who have had green cards for years are now applying for citizenship. People seeking asylum are heading to Canada instead of coming to the USA.

The impact is definitely prevalent within the immigrant community. I'm seeing petitions being reviewed under more scrutiny. I'm also seeing an increase of asylum cases sent to court. California has had the highest asylum approval rate in the country, and our current president has begun questioning it, which is leading to more asylum cases being adjudicated in court.