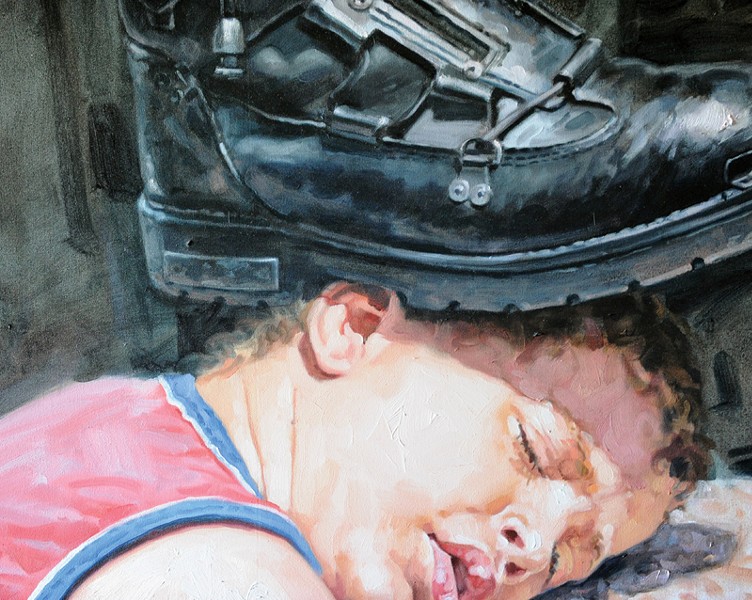 Even in one's peripheral vision, the frame is distracting. Something about it is wrong: the top and bottom third are missing. Surely, this is a mistake—right?

Looking closer, the artist's gambit reveals itself. On the right of the painting, a group of spectacularly garbed street performers, laughing, are shown to be pushing against the left portion. On the left, a group of dour-faced government officials sit helpless, shoved out of the metaphorical picture and the literal frame.

During the other nine months of the year, this homage to the people's power to overthrow their oppressors hangs in the San Francisco office of Darius Anderson. But through April 14, it welcomes visitors to "Revolutionary Island: Tales of Cuban History and Culture," an impressive and expansive exhibit at the Sonoma Valley Museum of Art of the Sarah and Darius Anderson Collection, opening Jan. 19.

In keeping with the history of Cuba, repeated themes of oppression unite this variegated collection, and Anderson, a lobbyist, developer and newspaper owner, is clearly taken with Cubans' conveyance of this through artistic means. Cumulatively, the exhibit elevates the spirit of the country's people while indicting both the restrictive rule of Castro and the ongoing U.S. embargo against the island.

Anderson, who has traveled to Cuba over 50 times since 1986 and met with Fidel Castro repeatedly, says he doesn't get involved in politics while in Cuba. "But what you find," he says, "is an economic policy, really on both sides, that has failed. And I think the average Cuban is caught in the middle. There are a lot of people who have been hurt in the process. My wish is that eventually people will see the ills of their ways, and we will lift the embargo. And that as we lift the embargo, the Cubans will go ahead and do what they can to lift the restrictions on their citizens."

One large piece, Underwater Kingdom, impresses this bluntly. In it, people of all ages carry bags and boxes of meager possessions. Stepping back reveals the group to be underwater. The piece, with four attendant portraits, is made of the visages of those who died trying to immigrate to Miami.

Another, a sculpture, fingers Castro with humor. A figure of Pinocchio stands atop a pile of hardbound transcripts of Castro's four-hour "History Will Absolve Me" manifesto from 1953. Pinocchio's nose melts into white rope, which wraps around the Disney character like a tangled straitjacket. The message is clear: Castro is a liar.

Castro himself is a prevailing presence in "Revolutionary Island." In 2001, after a dinner with Castro that went until 3am, Anderson was gifted a wine glass by the president; it completes a display of cigar boxes, humidors and artifacts from El Floridita, a favorite nightclub of Ernest Hemingway, among other historical objects. Elsewhere, Castro's signed photo and original posters from the revolution hang in a room housing a huge tank modeled after the one driven by Castro and Che Guevara through Havana, created by Petaluma art-car guru David Best.

To Kate Eilertsen, executive director at the museum, one large installation is destined to be "the showstopper." Bundles of newspapers are arranged like a mattress, beneath typewriters hanging on the wall. A plaster-of-Paris figure lays flat on the papers, with no shirt or pants and closed eyes. "He is dreaming, dreaming of what it would be like to have freedom of expression, to be able to speak," says Eilertsen. "I think the message in this is wonderful: the only place he can really think of what he wants to say is in his dream life."

Along with a chilling portrait of a toddler's head being crushed by a military boot, artist Franklin Álvarez Fortún is represented by a painting of an African-Cuban drinking out of a cup that reads "Made in China."

"And that really symbolizes what's happening with Cuba right now," explains Anderson, "as they, in essence, are partnered with China, and China is trying to dominate the oil reserves there; they're trying to buy all the best cigars, they're trying to buy all the best rum, and they have an insatiable appetite and ability to consume. And it's a real struggle right now for the Cubans to not go ahead and say yes."

Not all work in the show is of a political nature. Caballo con Niña is a 2008 work by Duvier del Dago of a life-size horse made from hanging knotted string; and Rubén Alpízar, inspired by the surrealists, places rotisserie knobs on his frames and employs tight detail in small portraits of John Lennon, the Dalai Lama, Charlie Chaplin, Martin Luther King Jr., Walt Disney, van Gogh, Frida Kahlo and others. At the front of the exhibit, large six-foot steel clothespins by Nelson Dominguez stand in the entry beneath a hanging circle of baseball jerseys, including that of Adiel Palma, the pitcher who helped bring home the silver medal for Cuba in the 2006 World Baseball Classic.

Over time, it has gotten easier for U.S. residents to visit Cuba, and Anderson currently receives a license to travel from the Treasury Department through his nonprofit Californians Building Bridges. Though restrictions are placed on the amount of money per day visitors may spend, arts and educational materials are exempt from the spending limit. Still, it is not easy to get large works of Cuban art to America, and much of the show has been shipped with the assistance of galleries in Canada, Spain and Panama.

Though he "absolutely" wants "Revolutionary Island" to be about the Cuban people and not himself, it is hard to separate the high profile of Anderson from this show. A controversial figure in the city of Sonoma, where he plans to build a luxury hotel off the downtown plaza, Anderson last year led a group of investors to purchase the Press Democrat, adding to his newspaper ownership of the Sonoma Index-Tribune. With his firm Platinum Advisors, Anderson is also among the state's most powerful lobbyists.

Anderson's impressive collection of art represents civic engagement, the voice of the people who have no voice, and one can't help but feel that he is attracted to the direct purity of the Cuban artists' methods to express that which he is paid handsomely to amplify in America.

"What I hope," Anderson emphasizes, "is that one day Cuba will be free to express themselves and have direct representation in government the way we do."