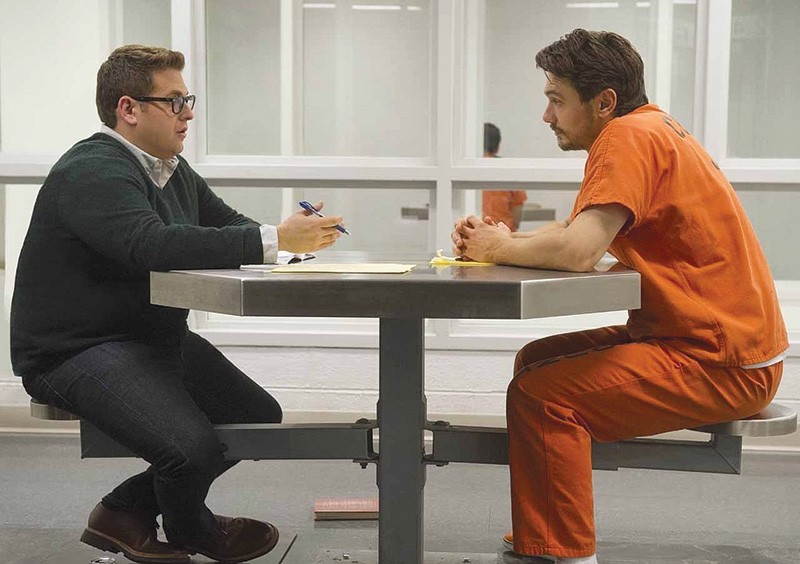 Simultaneously condemning and promoting exculpatory baloney, True Story, directed by Rupert Goold, contrasts two evildoers. One is Mike Finkel, a New York Times Magazine writer, disgraced after he used composite characters in a cover-story about modern-day slavery on the African cocoa plantations. The other is Christian Longo (played here by Palo Alto's own James Franco). Longo was merely a multiple murderer.

Finkel (Jonah Hill) is barred forever from the Times—literally in the wilderness, since he's hiding out in snow country in Montana. There he learns that an arrested suspect in a multiple homicide stole Finkel's identity while he was on the run in Mexico. The reporter heads to the coast of Oregon to meet the jailed Longo, in custody as the prime suspect for killing his wife and kids.

As Finkel and Longo later collaborate on a book, we're meant to wonder whether this suave Hannibal Franco is going to make Jonah Hill his Clarice. Franco is a lot of things, but is he scary? Is he either diabolical or scary in the banality-of-evil way, or the seductive, diabolical way? Is he indeed too self-charmed to really let the evil in?

Cinema doesn't have to moralize, but it ought to teach us some pity. The announcement that Longo finally got published is spun as a triumph of hustle—in fact, Longo was trying to do some good, using his notoriety for an op-ed piece to allow organ donation for prisoners. I don't fancy the way True Story shackles the viewers in a chain of guilt: you want easy answers from your newspaper, ergo you're complicit. You want to understand the criminal mind, ergo you're an accessory after the fact.

The movie seems small-minded in a cinematic world that contains Hitchcock's works—say, Shadow of a Doubt—films that place a dark mirror before us, so we understand both the passions of a killer and the killer inside us.