Moving artfully on with Mel Graves 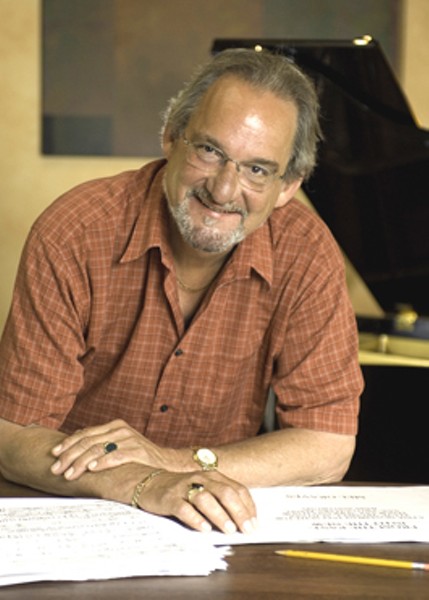 Reclining on his black leather sofa, Mel Graves surrounds himself with written notes and sheet music. With his girlfriend's dog at his feet, he talks with his trademark mix of insight, humor and passion, as vibrant and alive as he's ever been. But in addition to the gold watch on his left wrist, he also bears a medical bracelet on his right.

At 61, Graves, widely loved as a brilliant jazz bassist, instructor and composer, has been diagnosed with inoperable pancreatic cancer. He does not have much longer to live. The music and written notes scattered around the room are part of a farewell performance to be held Nov. 9 at Sonoma State University, which he has himself titled "Movin' On." He's hoping the night won't be a somber affair, and with past alumni, longtime sidemen and good friends onstage, it's sure to be an exciting if bittersweet celebration of the life of one of Sonoma County's great jazzmen.

"I think one of the main things you learn in jazz is to be in the moment," Graves says. "It's a thing that I've tried to carry into regular life. To me, all of life should be art. It should be done in an artful way whenever possible, whether you're eating or making love. Life is art. And death is art. It's all part of the same thing. I don't believe there's life and death. I think there's just a continuing plane. Yes, it'll be a difference, of course, but it's all part of the same thing."

Aware of Eric Dolphy's well-known description of music ("Once it's over, it's gone in the air"), Graves has lived a life of ensuring that his music thrives long after he is gone: he's written over 100 jazz compositions, released numerous albums both as a leader and sideman and last year premiered a two-hour suite for 10-piece ensemble entitled Out of the Past—Into the New, which he describes as "a culmination of my life's work."

A legacy even more direct is Graves' widespread influence as an instructor at SSU, where for 25 years he's touched the lives of thousands of young musicians, many of whom have gone on to successful musical careers. He has always been a hands-off instructor, helping the student to find the right feel instead of directing which notes to play. Since his diagnosis, former students from all over the country have been writing to Graves, sending emails and making calls, each echoing the same sentiment: Thank you for teaching me everything I know.

Graves says in the last two months, he has felt his world getting smaller, his thoughts turning inward. He notes how little snapshots of his life have been coming back to him, peacefully, over the last few weeks, instead of flashing quickly before his eyes. More than anything, he's glad to have had the life he's been given.

"I mean, what do I have to complain about?" he asks, ignoring the obvious.

"I've pretty much worked and played up and down the pike here for decades, and I've had a lot of memorable experiences with wonderful audiences," he says gratefully. "I appreciate the fact that my music has been appreciated, that my bass playing has been appreciated, and it looks like my writing has as well. I feel fortunate to have lived in an area where my music is supported."

Between chemotherapy, hospice care and doctor's visits, Graves has continued to compose. A piece sits at the piano which he recently completed, and soon he'll enter the studio to oversee the recording of a new contemporary vocal work, titled "About Knowing." Perhaps most poignantly, he has added a sixth and final movement to the large-scale opus Out of the Past—Into the New. He hopes that it will be performed posthumously, perhaps at the Green Music Center, at SSU.

But for now—in the moment—Graves is looking forward to the big party he's throwing for himself, featuring some of his favorite players, peers and alumni. He is too weak to play the bass, but with the immense talent onstage, he says he won't mind being a spectator.

"Who knows what kind of shape I'll be in," he ponders, "but I think it will come together quite well. You just have to roll into acceptance and gratitude for what you have, and move along. I'm OK with it, you know?"