My Side of the Mountain is one of those books you read as a kid, and immediately decide that the coolest thing in the world would be to live in a tree.

The protagonist, Sam Gribley, runs away from home and makes a house for himself from a hollowed-out tree in the New York Catskill Mountains. It's a cozy little hidden redoubt for the lad—warm and safe and, most important of all, you're living in a tree!

The treehouse phenomenon is a big deal these days. There's a TV series about treehouse building, Treehouse Masters. That show is mostly for rich people with annoying children and a big tree in the backyard, but it's an entertaining look at how to actually build a treehouse.

And you can rent treehouses all over the world for your next vacation. Actual treehouses. 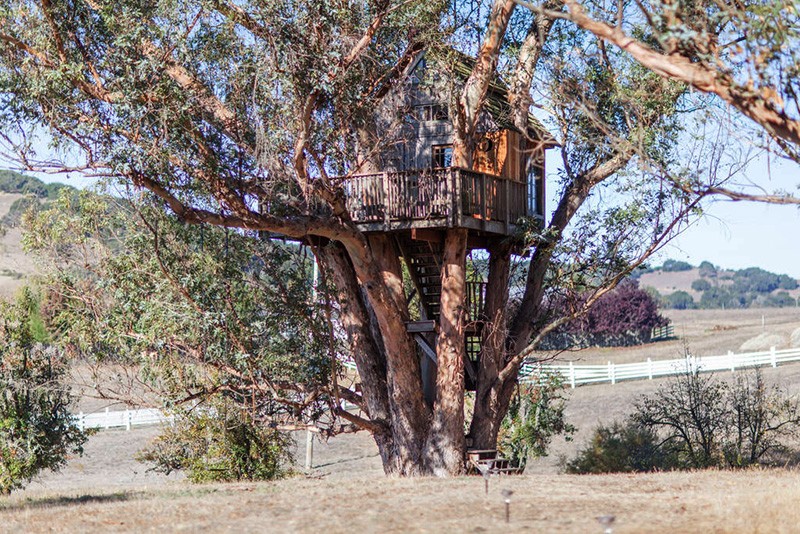 However, if you're looking to rent a treehouse in the North Bay, be on the lookout for well-meaning impostors. There are more than a few.

Despite lots of vacation listings for "treehouses" up here, on closer inspection, there's not much in the way of rugged outposts 50 feet up a redwood for a Tarzan-Jane honeymoon.

The definition as to what makes an actual treehouse is pretty loosey-goosey. Almost every local "treehouse for rent" listing I found was not for "a house in a tree," but rather "a house that is so surrounded by trees, it's practically like being in a treehouse."

That's not the same thing! And yet those rentals are everywhere. A "treehouse" for rent in Sausalito turns out to be a house surrounded by trees.

"The Treehouse: A Romantic Russian River Retreat," sounded like a really cool Guerneville rental, since it's in a treehouse, right?

Not exactly. The treehouse is another house nestled among trees.

The "Redwood Tree House in Healdsburg" offered the same story, but from a different boutique town: it's a cottage nestled among redwoods, not a treehouse located in a Redwood.

The "Monte Rio Tree House" up on the Russian River is yet another not-treehouse: "The third level feels like you're perched in your childhood dream treehouse—you are way, way up in the redwood trees!"

OK, but you're not actually in a treehouse, but in a house that's situated so that it feels like you are.

The Blackthorne Inn, in Pt. Reyes Station, resembles a giant treehouse, according to its press materials, but it's not a treehouse.

The Bella Luna Mountain Retreat, in Mill Valley, says it's a "treehouse," and lives up to the billing: yet another house, surrounded by trees.

My inner Gribley is getting a little peeved.

Are their any actual treehouses for rent in the North Bay? Yes. The Tree House at Swallowtail Studios. That neat little Petaluma cottage is located 30 feet up a eucalyptus tree, and it's not surrounded by anything except great views. It's a start. Find it on Airbnb.