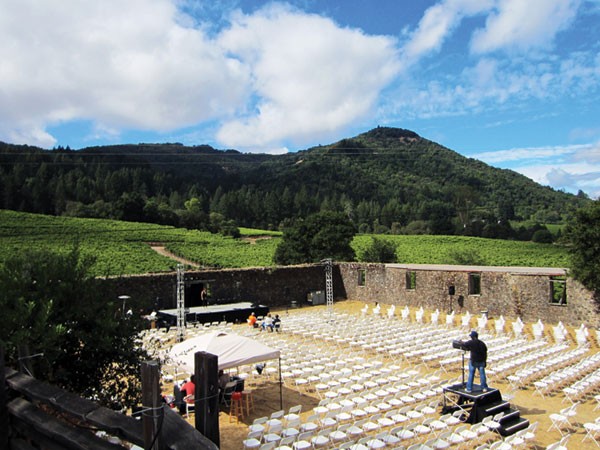 In 1906, when Jack London set up his ranch in the Valley of the Moon near Glen Ellen, he had huge plans for the land. But he probably never imagined that one day the ranch would include a 900-seat, open-air theater featuring Broadway performers singing and dancing under the stars.

That idea is now springing to life, thanks to the Transcendence Theatre Company, a troupe of Broadway-trained singers, dancers and actors inspired, in part, by efforts to save Jack London State Park from closure.

"Jack London had a dream," says artistic director Amy Miller, acknowledging a large sign with that same observation, posted near the ruins of the old winery not far from the parking lot. With executive director Stephan Stubbins, Miller is at the park this morning, finalizing plans for the summer's first series of shows. "He had a dream, and so do we. It's amazing that after years of dreaming, it's finally starting to happen."

Beginning this weekend, Transcendence launches "Broadway Under the Stars," a series of splashy musical revues that take place inside the ruins, featuring a rotating cast of performers with Broadway and Hollywood experience. A portion of ticket sales go directly to Jack London State Park, providing monies necessary to keep programs operating at the sprawling institution, and between now and September, the company will stage 14 performances, beginning with a show appropriately titled To Dream the Impossible Dream.

Just over a year ago, it seemed likely that the park would be shut down by the state of California as part of its cost-cutting measures to balance the budget. Now, with the help of numerous community sponsors, donors, nonprofit groups and volunteers—boosted by last month's decision in Sacramento to keep the parks open for now—Transcendence hopes to make Jack London State Park its home, with a full theatrical season featuring Broadway musicals and other types of entertainment.

As Stubbins leads the way through the archway of the ruins and onto the vast rectangular lawn surrounded by an old stone wall, he points beyond the west wall to the vineyards and up at the bright blue sky. It's that sky, with its legendary views of the moon, that London immortalized in his 1914 novel The Valley of the Moon.

"On some nights," Stubbins says, "the moon will be the star of the show."

Originally based in Los Angeles, the members of Transcendence had a vision four years ago of establishing a spot where they could present outdoor theater in a gorgeous natural environment. During a months-long cross-country tour, driving from one end of the States to the other, the company discovered a number of promising possibilities for its future home base.