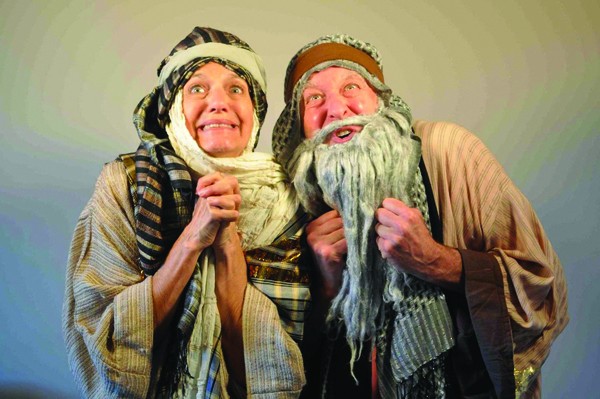 In Burying Our Father, an original comedy by Fred Curchack and Laura Jorgenson—opening this weekend at Main Stage West in Sebastopol—an ancient tale from the book of Genesis is resurrected, probed, prodded and mined for laughs, all in the interest of exploring mankind's search for spiritual meaning.

"It's a two-person Biblical epic," says Curchack, chuckling at the oxymoronic vibe of the phrase. "In this case, the epic is the story of Abraham, one of the seminal myths of the West—and also, of course, a primary myth of Jewish, Christian and Muslim culture.

"So yeah, basically, it's hilarious."

According to legend, God told Abraham that he would become the father of a great nation if he did as he was told and asked no questions. Abraham eventually had two sons. One, Isaac, was conceived with his wife, Sarah, while the other, Ishmael, was conceived with his handmaid, Hagar. The relationship between them was complicated, to say the least, so Ishmael and Hagar were given food and water and sent into the wilderness, where God promised he would bless Ishmael and raise up yet another great nation from his seed.

Meanwhile, to test Abraham's faith, God told him to sacrifice Isaac on a bundle of sticks, and to ask no questions about it. Just before cutting his son's throat, God stopped Abraham and gave him a goat to sacrifice instead. From Isaac's seed grew the Jewish people, while from Ishmael's seed grew the Muslim people.

But, as it turns out, that's just one version of the story.

"In our play," says Curchack, "we imagine what might have happened, years later, when Isaac and Ishmael meet up again to bury Abraham. What would their conversation have been like? Turns out it would have been pretty funny."

As history shows, the rancor between the descendents of those two figures has been bloody and violent. It's hardly the stuff of comedy. Right?

"You would think so, but that's not how comedy works," Curchack says. "We did this show recently in a small theater in Texas, and one woman come up afterwards and told us she hadn't laughed that hard in years. Sometimes things are so bad they just have to move toward comedy.

"Besides," he adds, "in our version, Laura plays God. She was born to play God. She's hilarious."