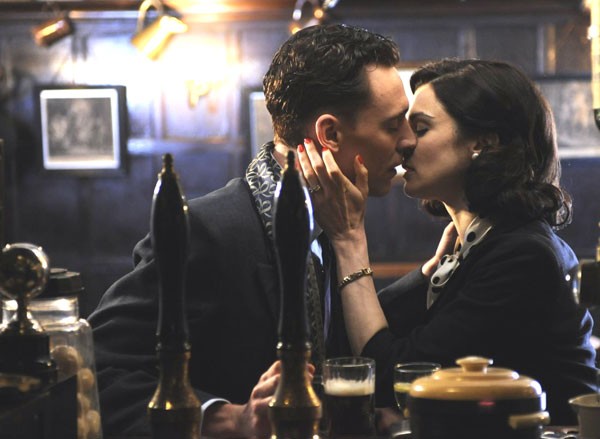 Few have illuminated English desperation as well as director Terence Davis, but not many do so as sporadically. The Deep Blue Sea is the director's first feature film in eleven years.

In grim 1950's England, a judge's wife, Hester (Rachel Weisz), is on the verge of suicide because of her hopeless love for former RAF pilot, Freddie (Tom Hiddleston).

We enter the story at what seems like its endgame: Hester is stuffing towels into the door frames of her room and swallowing pills, just to make sure she won't wake up. She's still pale from the attempt when her husband, Sir William (Simon Russell Beale), shows up for a visit. The old man asks his wife, "How could you throw away so much for so little?" In fact, Hester is "throwing it away" for physical passion, which surprises her as much as it does her husband.

The affair is essentially over, though Hester is still struggling. She's taunted by memories of an early sight of Freddie standing on a country club terrace, looking handsomely uncomfortable and weakly attractive in a double-breasted suit and an ascot. Davies shuttles in time to the night of the last confrontation with Freddie at a dimly lit pub. Hiddleston is successful at sinister roles, but Freddie isn't a one-dimensional cad, even though he's not above taunting Hester about her class.

Because Davies and his superior cast have such a handle on this material, the humor doesn't break the frame. Bedroom-bound, Hester says, "They can't ration everything." Plus, there is a definite figure for contempt in Sir Williams' gorgon of a mother (Barbara Jefford), who has it in for Hester.

One must agree with Hester when she says that "tragedy is too big a word" for her suffering. The Deep Blue Sea has a well-developed cerebral side, but the film is a reminder of the futility of out-thinking a case of being in love with the wrong person.