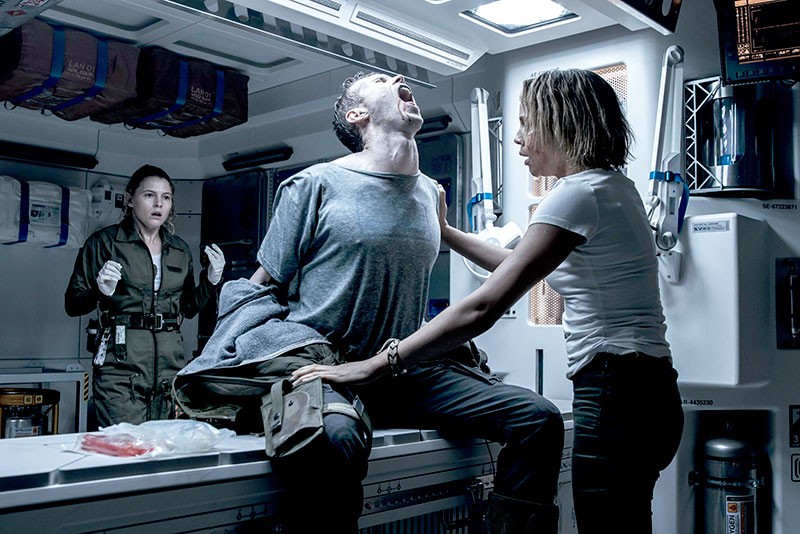 Alien: Covenant has sterling production design and an almost regally solemn Jed Kurzel score. It mulls the idea that humans and the hellspawn xenomorphs have a linked destiny. Animated now, as opposed to being acted out by a seven-foot tall stuntman as in the original, the critters come in all sizes and shapes. They're as lithe as monkeys, chittering, making creaking noses like sprung floorboards.

But director Ridley Scott is up to more than retrofitting the origin of the aliens. He contrasts the world of the religiously faithful with those of us who'd prefer to do without celestial help. Religious officer Christopher Oram (Billy Crudup) is peeved about being out-numbered by humanists. There's a debate about human intentions between a pair of "synthetics" (androids). Michael Fassbender plays both, and if there's anything particularly good about this movie, it's the way these two interact in a well-made fight scene.

Do the deep-dish ideas get in the way of the gut-busting, or is it the other way around? There's more monster for the buck than there was in the previous prequel, Prometheus, but the human hosts don't make an impression. I'll walk that back. Katherine Waterston makes an impression, a negative one. Her Daniels, a terraformer who just wanted a cabin by a lake on a faraway planet, is widowed right away. Eventually, she gets in the Ripley game, standing in for Sigourney Weaver, and there's just no substitution. She's a very wet actress and tragedy is becoming a specialty. She wept frequently in Fantastic Beasts, too.

The parts that work best are everyday sci-fi material, though the oddly similar theme in Guardians of the Galaxy Vol. 2 was far more bracing. Scott has said that he's a better director in old age. The elder director, and the elder man, can end up judging the human race as damned and worthy of destruction. It's an argument, but as theme for an entertainment, it's just plain depressing.

'Alien: Covenant' is playing in wide release in the North Bay.