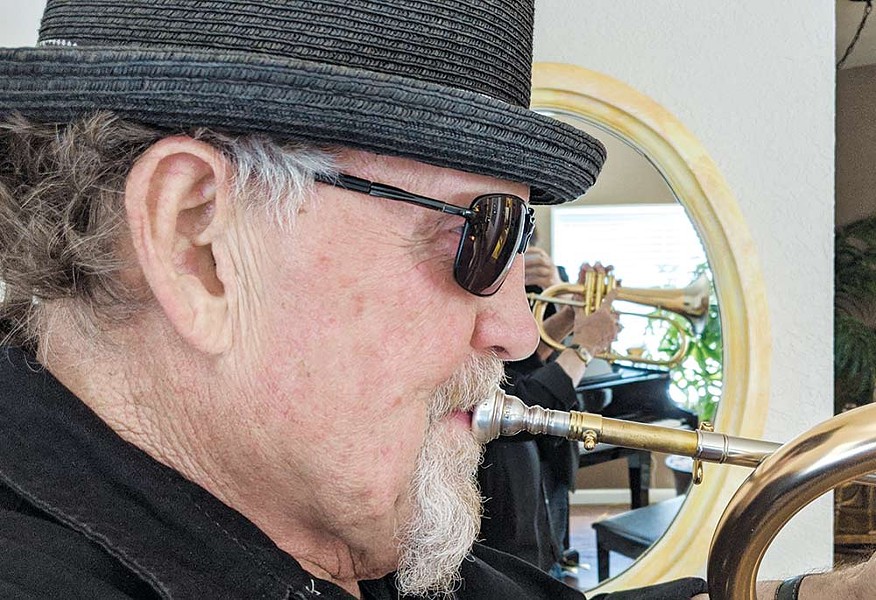 Musician, arranger, bandleader and soon-to-be-professor Peter Welker spent more than 50 years embodying the spirit of jazz in the Bay Area.

Schooled in tradition and musically evolving since the early ’60s, Welker’s eclectic tastes helped carve the San Francisco, East Bay and North Bay jazz scenes for many years. But he’s not long for the region, as he’s soon moving to Arizona to begin a new career (at nearly age 78) as a university-level music instructor.

Before he goes, Welker looks back on a half-century of jazz in the Bay Area.

Welker is actually an East Coast native, born to musical parents. His mother, who was born blind, was an acclaimed jazz pianist and vocalist, and his father was a bandleader in New York City. Welker first picked up his primary instrument, the trumpet, at age nine. When he graduated from the prestigious Berklee College of Music in Boston in 1962, he set his sights not on New York or London, where many of his classmates were headed, but on San Francisco.

“You know, I was intimidated by the thought of either going to Europe or New York,” Welker says. “And I would see some of the football games in October and November with the 49ers. I would be freezing in Boston and see them playing at the old Kezar Stadium on Stanyan Street, and I’d go, ‘Man, look at the sunshine, they’re in their shirtsleeves.’ So that was partly it.”

Welker adds that he also thought he would have a better shot at making it in the Bay Area as opposed to the highly competitive New York City scene. With that intent, he hopped on a Greyhound bus and arrived in San Francisco’s Haight-Ashbury district in 1962.

Shortly after arriving in town, he assembled a sextet, three horns and three rhythm players, and quickly established the group as the house band at the Jazz Workshop in the city’s North Beach neighborhood.

“What you would do back then, there were all these jazz clubs on Haight Street and Divisadero, and the first five people that made up a reasonable band that showed up every night, that would be the band,” Welker says. “So I made sure I’d get there early and then we’d split the door at the end of the night. Back then, you’d end up with 10 bucks a night each, but I was living in a rooming house in the Haight that was 40 bucks a month. I was living large, and there were a lot of good players back then.”

Welker’s musical life took a massive turn in 1967 when he discovered rock ’n’ roll and broadened his musical vistas to fuse jazz and rock together with funk, Latin and more.

“Probably ’68, I hooked up with a great horn band, and I was playing at a club in Jack London Square, and we were alternating with Tower of Power, who hadn’t been signed by Bill Graham yet, but they sure sounded great,” Welker says.

It was at one of these gigs that guitarist Marvin Holmes heard Welker play. Holmes, regarded as one of the Oakland funk scene’s founding fathers, recruited Welker to lead a horn section on a short-lived project named Rush that also featured players including trombonist Steve Turee and trumpet-player Tom Harrell.

In 1969, Welker received his first big break when he auditioned for and was hired to play in the touring Glenn Miller Orchestra. After that, he returned to the Bay Area and performed with Cesar’s Latin Band, again in North Beach, and played four nights a week with musicians including Latin Jazz percussion legends Pete and Coke Escovedo and Victor Pantoja.

“We had a 12-piece band, it was incredible,” Welker says. “We sold out that club every night for four years.”

Welker then joined East Bay R&B legends Cold Blood, booking the gig after a two-day audition while he recovered from pneumonia. From there, he just got busier and busier.

“Jerry was great, I got to record on the Not for Kids Only album he did with David Grisman,” Welker says. The 1993 album, which featured children’s songs performed in stringband and other old-timey traditions, was dedicated to Welker’s son Jacob, who died that same year at the age of five after a four-year battle with leukemia.

“Jerry knew him, and David knew him too,” Welker says. “It was really sweet of them.”

Other musicians who knew Jacob, including Pete Escovedo, Norton Buffalo and organist Dave K. Mathews, also joined Welker on his own 1997 album, Para Peachy, which marked his return to music after his son’s passing.

Welker has lived in Petaluma since the mid-’70s, and most recently, has co-led the instrumental sextet Sidemen. Welker cofounded the group with drummer Todd Tribble and hand-picked players including bassist Cliff Hugo, guitarist Morris Acevedo and saxophonist Steve Steinberg, with a rotating keyboard player to mix it up.

“Every one of the guys in the band has played with every big name you can think of, that’s why we came up with the name Sidemen,” Welker says.

“We have six multi-Grammy winners on the album, which is unheard of,” Welker says. “We have the core band and 24 musicians on the project.”

“I pulled together all of my favorite genres of music; jazz, funk and Latin, and the band has all those influences going on,” Welker says. “I have seven albums out under my name, and they were all jazz, but I’ve never done anything like this and I’m so excited about it.”

Despite the excitement of performing with Sidemen, Welker soon departs the Bay Area for the drier Arizona climate. Once he gets there, he will interview with five Phoenix-area universities and hopes to settle into a teaching position at one of them.

Though he’s never taught music before, Welker calls himself a “Road Scholar.” He has amassed fifty thousand hours of music composition and arrangement in addition to building a touring resume that is a million miles long; meaning he should have no trouble getting a position once he relocates.

In fact, Welker was already scheduled to have conducted the interviews and sold his Petaluma home, but the Covid-19 outbreak put those plans on hold. He hopes to be in Arizona by the start of the Fall 2020 semester.

“I would love to be able to share all the stuff I‘ve learned over the years and pass it on to the young folk and hopefully brighten their life a bit,” Welker says. “I’ve taught a little bit privately, and I’ve seen the joy it brings a student to learn new stuff that they can add to their tool belt. I just want to keep passing this music along.”