MTC's 'Shakespeare' in love with the stage 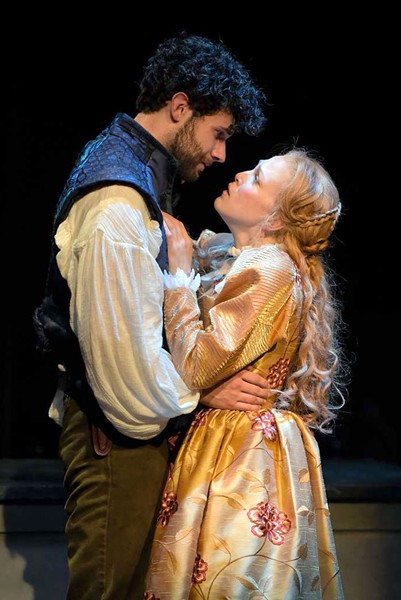 Shakespeare in Love, the play, is as much a mixed bag of contradictions and clashing tones as the Oscar-winning 1998 film on which it is based.

I confess, it appeals to me.

First produced in 2014 in London to great acclaim (despite it's nearly two hour and 45 minute running time), the current version clocks in at a lean two hours and 15 minutes. Stripped down and cleaned up, the original stage story's obvious deficits—confusion, sloppiness, excessive bloat—are now largely outweighed by Hall's tightened script.

The new ending, too, showcasing one of the film's most quoted lines, works much better.

Though still clunky and unfocused, Shakespeare in Love frequently soars with energy and enthusiasm, given flight by director Jasson Minadakis' skillful emphasis on pace, silliness and a deep love of all things theatrical.

Played with wistful charm by Adam Magill, a decidedly fictionalized William Shakespeare is introduced as an unknown playwright battling writer's block while attempting to complete something called Romeo and Ethel, the Pirate's Daughter. The play, if finished, will prove the salvation of the struggling Curtain Theater, represented by Kat Conley's spare assemblage of naked scaffolding and skeletal framework. Romeo and Ethel will also save the theater's debt-ridden owner Mr. Henslowe (an uncharacteristically stolid Robert Sicular).

As in the film, Will is ultimately rescued from literary impotence upon meeting the young actor Thomas Kent, whose mustache and doublet are actually the masculine disguise of the wealthy Viola de Lesseps (Megan Trout). Viola is desperate to act, despite the period's laws against employing women as actors.

In short order, Will has fallen for her, though she is tragically tied to the despicable Lord Wessex (Thomas Gorrebeeck). After accepting the futility of their love—despite some very modern sex—Shakespeare is inspired to create his masterpiece Romeo and Juliet.

Shakespeare in Love, despite its flaws, is a true celebration of the art of theater, and the bruised and battered, slightly lunatic artists who've kept that art alive for the last 400 years.