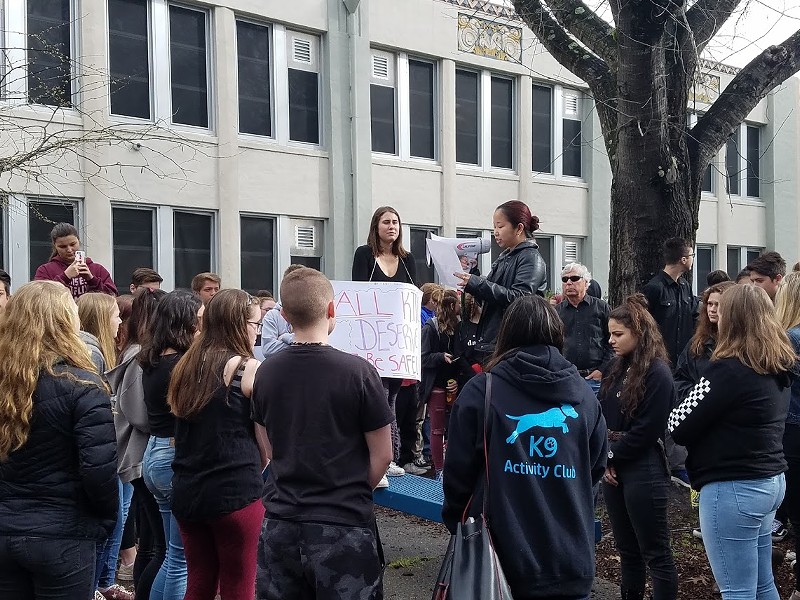 At 10am today, March 14, students at Analy High School in Sebastopol streamed out of classrooms to take part in a national walkout to call for greater gun control in the wake of the mass shooting last month at Marjory Stoneman Douglas High School in Parkland, FL. Scores of other schools in the North Bay and beyond took part in the demonstration.

The students, several of whom carried signs calling for safer schools and stricter guns laws, gathered in front of the school for 17 minutes to honor the lives of the 17 children and adults killed in the shooting.

“We need to make a change,” said one student over a megaphone to the gathered crowd. “I’m sick of looking at the news and seeing dead children.”

Her words were met with chants of “enough is enough” while a smaller group of adults who showed up in support of the rally cheered them on. Junior Abbey Chinn, 16, a member of Safe Schools Ambassadors, helped organize the event and was pleased with the large turnout in spite of what she said was the school administration’s opposition.

“We did it anyway,” she beamed after addressing her fellow students.

As the students listened to impassioned pleas from their fellow classmates for gun reforms, a pair of students carrying a banner emblazoned with an AR-15 and the words “Come and Take It” walked by the crowd to stage a pro-gun counter-protest. Parkland shooting suspect Nikolas Cruz reportedly used an AR-15 in the massacre. The pro-gun students elicited a sharp debate from students calling for more gun control.

Sebastopol Mayor Patrick Slayter attended the walkout and said he supports greater gun control and was heartened by the students’ activism.