Inside the shocking and controversial practice of 'goat yoga' 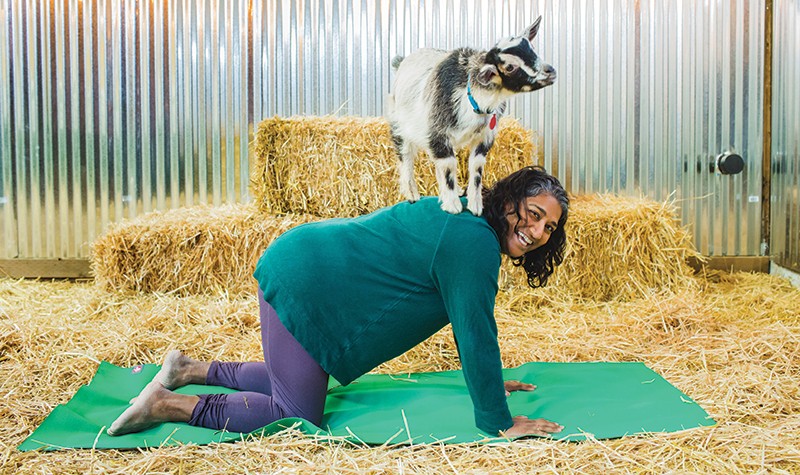 "Goat yoga," smiles Eckhart, stepping back to let Poppy snuggle in for a scratch behind the ears, "is all about joy."

Goat yoga, a real and admittedly offbeat practice—in which humans do yoga in the presence of goats—originally began in 2016, in Corvallis, Ore. That's where Lainey Morse, a one-time marketing expert and longtime goat lover first coined the ear-catching phrase, teaming up with a local instructor for popular goat yoga sessions on her rural farm.

Goat yoga now stands alongside a widening array of alternative yoga offerings, from the popular hot yoga offered at many studios, to Lagunitas Brewing Company's weekly yoga-and-a-beer sessions, to yoga classes surrounded by fish at San Francisco's Academy of Sciences, to Jedi yoga (yes, that's a thing, too).

With just a little effort, depending on where you happen to be, you can experience yoga on beaches, yoga on horses, yoga on paddleboards, yoga in caves, yoga in planetariums, yoga in bowling alleys, yoga on ice, yoga with snakes and yoga with sloths, plus karaoke yoga, nude yoga,"ganja-smoking yoga, heavy metal yoga, laughter yoga, and even Harry Potter yoga, which is pretty much what it sounds like (Downward Facing Dumbledore, anyone?).

And in Cloverdale, for what it's worth, a local studio called the Yoga on Center has recently struck a resonant chord with its popular weekly class titled "Yoga for the Inflexible Male."

But few innovations have made as big a leap into the mainstream as goat yoga.

"The beginnings of goat yoga, I suppose, were a bit of an accident," explains Lainey Morse, contacted at her farm in Oregon, from which she now oversees a growing nonprofit called Original Goat Yoga, with satellite locations all over the country. At the moment, the organization's sole Bay Area location is in Morgan Hill.

The fact that her life is now built around goats and yoga is still something of a wonder to Morse, she admits. "I'd started something called Goat Happy Hour at my farm," she says. "I called it that because everyone who came and spent time with my goats always left happy."

Morse says she learned first-hand about the power of goat-related therapy when her life took several unexpected turns.

"I'd been diagnosed with a disease and was going through a divorce at the same time," she says, "and I was thinking, 'I should be more upset. I should be really sad.' But I'd get home from work and spend time with my goats, and it just made me feel good. My goats definitely kept me from slipping down the rabbit hole of depression."

Goat Happy Hour led to other events, including kids' birthday parties. It was during one of those that a local yoga instructor suggested that it would be fun to do a yoga session in the field with the goats.

"I said, 'OK, but the goats are going to be jumping all over the yoga students,'" recalls Morse, who agreed to give it a try, and soon after came up with the term "goat yoga."

"It just sounded so ridiculous and fun," she says, "though I assumed that only our friends and family would come and do goat yoga—and maybe not even them. Then we had our first class, and it was sold out instantly."

Morse took pictures and sent them to Modern Farmer magazine.

"I thought their readers might find it kind of cute," she says.

The magazine ended up sending our a reporter and running the story, with great pictures of people doing yoga with baby goats on their backs, and in short order, Morse got calls from The Oregonian, the New York Times, Huffington Post and others. The resulting demand was instantaneous, with the waiting list for people eager to experience goat yoga growing to 2,300 names.

"It was wild. It just absolutely changed my life," Morse says. "I was probably doing 30 or 40 media interviews a day, while also having a full-time job that I loved, and had had for 10 years. I finally decided, this just doesn't happen to people, and I'd regret it if I didn't take the opportunity life was giving me. So I quit my job and went all in on goat yoga."

"For one thing, goats have tiny little pellets, like rabbits do," she points out with a laugh. "Goat poop doesn't stink, and it's not messy, so if a goat happens to drop its pellets on your yoga mat, you can just shake it off. It's no big deal. But if you're doing yoga with a pig or a cat or a dog, and it poops on your mat, that's not going to be pretty.

"And the other thing," she says, "is that goats, quite simply, are the most loving and gentle creatures. Goats are the perfect therapy animal."

Initially, Morse attempted to trademark the term "Goat Yoga," but after spending more than $20,000 on lawyers, she grew tired of having her efforts denied. So instead, she trademarked the phrase "Original Goat Yoga," now the official name of her company. During the time it took to accomplish that, however, Morse watched as goat yoga blew up all over, breeding countless imitators, clones and copycats.

"I struggled with it for a while," she says. "It was a hard pill to swallow, that this thing I'd developed took off without me. Then, other people started trying to call their businesses 'Original Goat Yoga,' too. So I had to deal with that. I never dreamed that the world of goat yoga would become such a cutthroat, competitive business."

Morse hit another snag when she was told that she couldn't legally hold classes on her property because it was zoned for farming and not for business. That, ultimately, is why she developed her current business model of working with existing goat farms to use the Original Goat Yoga name, methodology and marketing muscle.

Today, she says she takes a lot of pleasure in seeing how widespread her weird little notion has become, and that so many people are reaping the mental, physical and emotional benefits of goat yoga. In November, she published The Little Book of Goat Yoga, and according to Morse, it's selling remarkably well.

"It's amazing to me that there are so many people around the world doing this crazy thing I started," she says. "I know its not exactly healing diseases or anything, but it's making people forget about their problems for a while, it's connecting them to nature, and that's worth something to me."

Which brings us back to Goatlandia.

This morning, the air is filled with the sounds of roosters crowing, dogs barking, birds singing and goats and sheep bleating. Goatlandia, somewhat rain-dampened and mud-slushy, is otherwise quiet after the morning feedings have concluded, thanks to Blum, Eckhart and a team of volunteers. Owned by acclaimed (and now retired) restaurateur Deborah Blum, the two-acre sanctuary—a certified 501(c)(3) nonprofit, largely volunteer-powered and funded almost entirely by donations—is devoted to the care, protection, resuscitation and (under the right circumstances) the adoption of goats, pigs, chickens and other farm animals.

"That's our mission," says Eckhart, "to rescue goats, sheep, ducks, chickens and pigs, give them a safe and loving home, and also educate people on a more conscious, eco-friendly lifestyle."

Many of Goatlandia's current 150 residents, spread between the Santa Rosa farm and another location in Sebastopol, were rescued from farms or ranches where they would have been euthanized—the fate three-legged Poppy avoided—or used for food. Some were abandoned or surrendered to Goatlandia after outgrowing their previous owners expectations. According to Eckhart, many of the current residents were taken in after the 2017 fires.

"We take a lot of pride in what we do," Eckhart says, "bringing home animals who would otherwise be killed."

In 2017, Eckhart, a trained yoga instructor, decided it was a no-brainer for Goatlandia to start offering goat yoga sessions of its own. The farm's open field with a wooden deck proved to be the perfect spot for classes. Goatlandia, she says, has about 20 goats at the moment, all of which are brought out whenever a goat yoga session is taking place. Each and every goat has an engaging backstory.

That definitely goes for Poppy.

"Poppy's original owners wanted to euthanize her, because she needed to have her leg amputated and it wasn't worth the money and effort for them," says Eckhart. "So we adopted her, we paid for the amputation. When she arrived here, that same day, she looked around and did a little three-legged happy dance, and we knew that she was supposed to be here."

Poppy even has her own Instagram page, the result of having been featured on Animal Planet, on the show Tanked, in an episode that aired last fall.

Unfortunately, somewhat echoing Lainey Morse's story, Goatlandia has butted up against land-use restraints. Due to zoning restrictions, the facility has had to heavily cut back on its public events, now offering goat yoga only as small, private gatherings for donors. As a result, Blum and the whole Goatlandia team are currently in the midst of a fundraising drive, with a dream of purchasing a new property where Goatlandia can return to doing public events, can establish an organic farm, offer bed-and-breakfast experiences, vegan cooking demonstrations and more.

When that happens, goat yoga will be a large part of the new facility's public outreach program. The farms supporters, not to mention the goats, will pretty much demand it.

"It's just such a joyful thing, doing yoga while goats are leaping all around you, climbing on you, curling up next to you," laughs Eckhart. "It's still physical, and it's still a good workout, but it's really all about the happiness of connecting with these creatures in a joyous way. And it's as good for your soul as it is for your body and mind."

To learn more about donations, volunteer opportunities or other ways to support Goatlandia, visit their website at goatlandia.org. To learn about Original Goat Yoga, and its classes in Morgan Hill and other locations, visit goatyoga.net.