At Cotati's Shige Sushi, art is on the wall and the menu 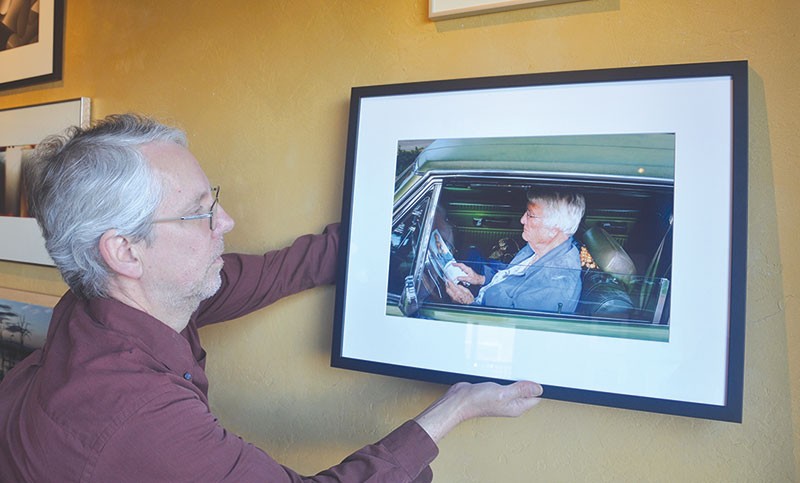 On the menu at Shige Sushi Japanese Kitchen is a wide range of delicious Japanese food. Opened by Shigekazu "Shige" Mori in 2012, the eatery is beloved by fans of traditional Japanese food.

But the tiny restaurant has a lesser known feature: it's a gallery space known as the Art Wall at Shige Sushi, curated by Santa Rosa artist and photographer Colin Talcroft.

Raised in New York City, Talcroft started photography and drawing at eight years old. "I've done all kinds of stuff," he says. "Photography, painting, collage and printmaking when I lived in Japan."

Talcroft first visited Japan as an exchange student in high school, then returned in 1983 after getting an undergraduate degree in Japanese and a master's degree in modern Japanese literature at Ohio State University.

For nearly 20 years, he lived mostly in Tokyo, teaching English, working in the stock market and making art. In 2000, he relocated to Santa Rosa with his family. Talcroft first met Shige when his wife started working part-time at the restaurant soon after it opened.

"When I first saw this place, it looked kind of blank," Talcroft says. "I said, 'There's a big empty wall here that I could have fun with.' Shige said, 'Sure, go for it.'"

Though he was more than familiar with sushi-restaurant aesthetics, Talcroft set his sights on doing something different with the empty space.

"I had two ideas in mind when I started this," he says. "One was that I did not want to show Japanese-themed art; I didn't want to think of this as a place that just showed travel shots of Kyoto, that kind of thing.

"My main idea, from the beginning, was that I simply wanted to show the best work I could get access to," says Talcroft. "My main interest is to find really good artists and, since I'm a working artist myself, I wanted to create a place where it's as easy for the artist as possible."

To that end, the Art Wall at Shige Sushi takes a much smaller percentage of sales from the art, offering local artists a venue that's accessible in a way many galleries that charge for wall space are not.

It's an unlikely venue, but that makes the Art Wall one of the most intriguing and intimate galleries in the North Bay.