In spite of shortcomings, ‘Kismet’ is filled with warmth, color and fun 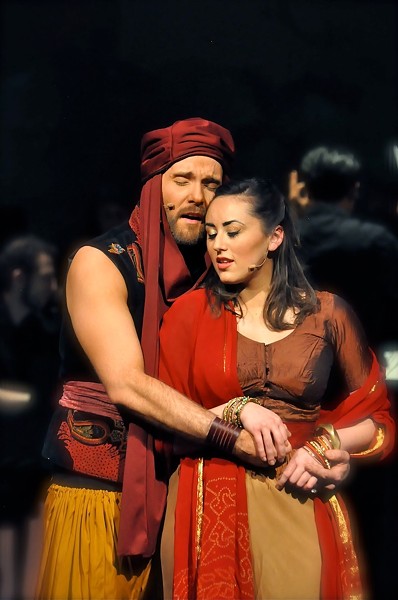 “Princes come, princes go,” sings Omar Kayam at the start of the long-lost musical Kismet, now playing at Spreckels Performing Arts Center. The same sentiment can be said of Broadway shows like this one. A huge hit in 1953, the Arabian-themed romance is largely unknown today.

In Spreckels Theater Company’s vibrant, nostalgia-driven new production—crammed full of vibrant costumes, outstanding singing, and lush orchestral music—it becomes simultaneously clear why the show is of such limited interest today, and why that’s also a bit of a shame. Set in ancient Bagdad during the time of poet Omar Kayam (Jeremy Berrick), the musical blends original songs by Robert Wright and George Forest with reworked pieces by the 19th century Russian composer Alexander Borodin, whose 1890 opera Prince Igor was largely rewritten for Kismet, adding a new story and wholly original lyrics to Borodin’s sweeping melodies.

Kismet’s story, based on a non-musical stage play from 1911, follows a poor poet (Tim Setzer, charmingly spot-on), who arrives in Bagdad with his daughter Marsinah (an electrifyingly good Carmen Mitchell) just as the prince (a somewhat stiff but gorgeously voiced Jacob Bronson) is reluctantly shopping for a princess, with candidates from surrounding kingdoms arriving by the score. Soon arrested for a petty crime, the poet attempts to save himself from the harsh punishments of the law-enforcing Wazir (Harry Duke, in a hilarious and richly entertaining performance), by passing himself off as a powerful sorcerer, simultaneously pursuing a reckless affair with the Wazir’s primary wife LaLume (Brenda Reed, sexy and scary all at once).

Meanwhile, Marsinah accidentally meets the prince, who, for various slightly unbelievable reasons, assumes she’s a visiting princess, just as she assumes that he’s a gardener. They fall in love to the show’s most recognizable tune, ‘Stranger in Paradise’, setting up a series of events that become frequently tangled, and a bit silly, right up until the stories slightly shocking climax.

In the end, Kismet turns out to be not much of a play, with a dated premise, thin characters and a preposterous plot. Still, the cast is marvelous, and as directed by Gene Abravaya with a sweet simplicity and an emphasis on the lovely but hardly memorable music, there is a bit of welcome sorcery on display here, bringing a lost artifact of from the Broadway heydays back to life with plenty of warmth, color, contagious enthusiasm and genuine love.