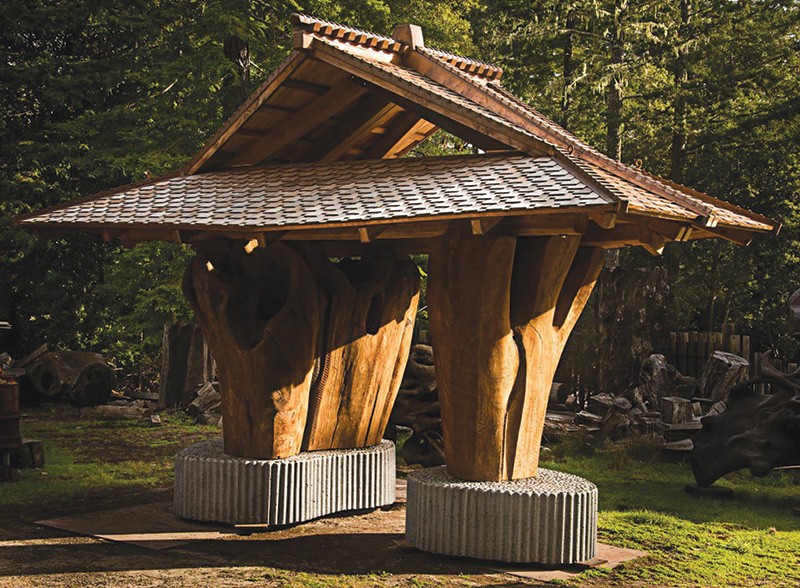 It may be as innocuous as a dandelion poking its fuzzy florets up through the cracks in a sidewalk. It might be an artist helping transform a drainage ditch into a tree-lined sculpture garden crammed with pathways, bridges and a forest of towering works of art. Either way, the appearance of nature in the midst of concrete and asphalt always brings with it a sense of the wondrous, the unexpected, the miraculous.

"Have you ever heard of a 'bull-mound'?" asks sculptor Bruce Johnson, leading the way past a quartet of pickup trucks loaded with tools and machinery at the north end of the parking lot at the Wells Fargo Center for the Arts in Santa Rosa. "In feedlots, they put up a big hill called a bull-mound," Johnson says, raising his voice to be heard over an electric saw being used by a team of workers 10 feet away, "because bulls become uneasy when they can't find a place to look over their herd."

Coming to a stop before a short knoll covered in plants, he gestures happily. "This," he says, "is what we call our 'bull-mound.' The heaviest and largest piece of art in the exhibit will be installed right here."

That piece is called Temple Bus Stop. Johnson describes it as "sort of a big portal, with an Asian-looking roof and massive chunks of wood as columns." It will be installed next month, along with more than a dozen other difficult-to-describe works of art Johnson has agreed to put on display for two years.

Temple Bus Stop will be the first in what will be an alternating series of outdoor sculpture exhibitions in the newly created Sculpture Garden and Art Walk, designed by landscape master Bill Mastick. Plans call for solar-powered lighting to illuminate each sculpture after the sun sets.

Though not opening until June, the space is already crawling with horticultural and architectural activity, in preparation for the installation of the first sculptures—really, really big sculptures, fashioned out of salvaged old growth redwood—at the beginning of May.

"The overall vision is still a bit in flux," says Johnson, pointing out the spot where an interactive "walk-in" sculpture called Slot Canyon will reside. "When it's all done, we expect to have about 15 of my pieces on display. It's very exciting, Wells Fargo Center and its commitment to doing something special with this facility. Part of what that is, is finding new ways to bring people to nature."

In this case, "nature" is a narrow but beautifully designed corridor between the parking lot, the Sutter Medical Center and the Wells Fargo Center.

"It's all part of a large program called the Bridge to the Future campaign," explains Anita Wiglesworth, the center's director of programming.

The four-phase project includes the facility's recent theater renovation. Efforts are focused on transforming the buffer zone between the Wells Fargo Center and the recently completed health center. The sculpture garden, which will link the two campuses together, will be open to the public. As Johnson continues the tour, Wiglesworth points to where a crew is installing one of two metal bridges, the primary structure of which—long frames of heavy metal—were once choral risers used inside the center's main auditorium. During the recent redesign of the interior, the risers were stored away with the idea of repurposing them as bridges crossing a stream or drainage area.

"So if anyone misses the old stage of the theater," Wiglesworth laughs, "they can find a little bit of it still existing out here."

For Johnson, repurposing such structures is part of the overall vision of the project. His sculptures, after all, are repurposed versions of the towering trees they once were.

"These big pieces of wood are all small acts of preservation," he says. "They are pretty muscular and energetic, and we're going to be punctuating this whole area with those kinds of pieces."

Johnson, originally from Oregon, has been a Bay Area resident most of his life. A graduate of UC Davis, he creates his wood-and-metal works of art (www.formandenergy.com) at his rural Sonoma County studio. Many of his large-as-life sculptures are in private and public collections around the world.

Johnson steps up to the top of a small rise, and points across the space to where one particularly interactive piece will be installed.

"It's a really unique observation tower," he says. "It's a tall piece you'll be able to climb up inside of and look out from. You'll be able to poke your head out through a hole in the top and survey the whole garden."

Exactly," Johnson laughs. "It's good to get up high once in a while, just so you know where you are and what you have."

The Sculpture Garden and Art Walk at Wells Fargo Center for the Arts opens to the public on June 6.