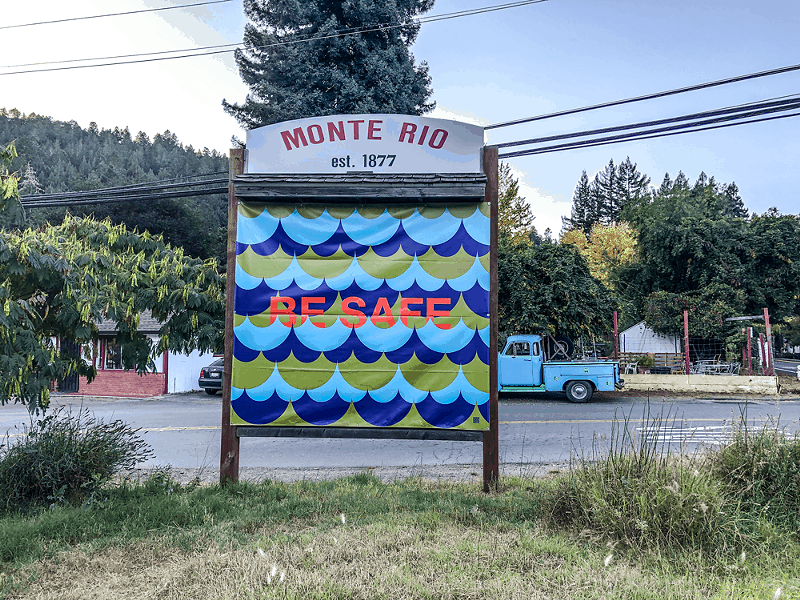 In a career spanning four decades, artist Jim Isermann envisions a brighter world in his modernist, abstract work by utilizing bold patterns and colors that bridge the realms of fine art and pop culture.

Splitting his time between living in Palm Springs and Guerneville, Isermann is making the Russian River his next canvas and designing artwork that will be seen throughout the community as part of a partnership with the Russian River and Monte Rio Chambers of Commerce, Creative Sonoma, and the National Endowment for the Arts.

The "Creative Reopening Project" features Isermann's designs dotting more than five miles of art installations which appear on the roads and in businesses in the Russian River corridor. Isermann's designs mix bright colors with messages of Sonoma County solidarity and Covid-related awareness on eye-catching signs and banners.

Isermann is a globally renowned artist, and he has shown his works in more than 30 solo exhibitions in cities like Paris, London, New York City and many others. Isermann's other recent projects include works for the Hammer Museum in Los Angeles, the Yale University Art Museum in Connecticut and an installation for the Cowboys Stadium in Dallas.

"One strength running through my forty-year practice is a belief in math, structural logic and geometric algorithms," Isermann says in his artist statement. "The asymmetric only occurs as the result of a set of rules. What keeps me on this road is the unpredictable, the serendipitous moments that make the work imperfect, breathe and come alive."

The "Creative Reopening Project" installation features messages that aim to educate and enliven the area, and Isermann's patterns are meant to reflect the natural arrangements and scenery native to the Russian River, the Sonoma Coast and the Redwoods.

In addition to Isermann's designs, the project benefits from it's lead creative designer Bob Pullum, owner of the Guerneville Bank Club. Pullum is an art director and graphic designer who has worked at many top agencies in the United States and he is overseeing the installations to help visually unite the region.

The works on display throughout the five-mile corridor range from vinyl banners and sandwich boards to window clings and even Isermann's specially designed face mask that's being manufactured by San Francisco company Open Editions–which collaborates with artists to design goods made by factories in the US. The public art also hopes to enliven the region without the need for social gathering, and works can be safely viewed in small groups for from the car.

"I have had a summer cabin in Guerneville since 2010," Isermann says in his statement. "I spend half the year in the desert and when I return to Guerneville each year I view the landscape with fresh eyes."

"Although the patterns I create are often representative to me, this project was a rare opportunity to design two patterns that represent the Russian River to all our neighbors and visitors," Isermann says. "The river and the redwoods were obvious choices. I solved the challenge by emphasizing the contrast between the curvilinear aspect of the river and the rectilinear design of redwood bark. I look forward to seeing the paired patterns on monumental vinyl banners, vinyl window wraps and custom face masks!”