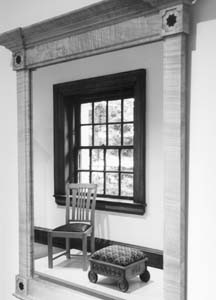 IT'S BEEN MORE than 12 years, but Jose Caubet still has a vivid memory of the key event that propelled him into the ranks of Sonoma County's professional woodworkers. Ask the Santa Rosa resident why he retired from his job as a mechanical engineer with Bechtel Corp. to take up the task of transforming wood into furniture and pieces of art, and he sighs deeply and laughs a bit ruefully.

"I needed to replace the doors in my kitchen, and the estimate the guy gave me was way too high," he recalls, still sounding a bit peeved. "I thought, 'I have a college degree. I can do this.' So I bought a cheap table saw and a few hand tools and a bunch of oak, and after an awful lot of effort, I got the kitchen done."

Since then, Caubet, now 58, has undergone extensive training in the craft, including a rigorous program of instruction under one of the most respected woodworkers in the country, James Krenov of the College of the Redwoods in Mendocino. And despite the sometimes daunting challenges posed by the craft, he clearly doesn't regret his decision.

"I like to work with my hands," says the Spanish-born Caubet. "There's a powerful attraction to being able to take a bunch of boards, put a lot of skill and effort into them, and turn them into a piece of furniture that people admire and that will last, that will be around for years and years."

In that passion he is not alone. Over the past couple of decades, Sonoma and Mendocino counties have developed a reputation for their thriving population of woodworkers, who are widely recognized for their skilled craftsmanship and unique visions. Inspired by the presence of the legendary Krenov, nurtured by the low-key, artistic atmosphere of the redwood region, these solitary artists work their transformative magic in studios, garages, and converted chicken coops all along the coast.

An eclectic sampling of that talent goes on display at the Sonoma County Museum starting July 2: "Artistry in Wood," an annual juried exhibit organized for the second year in a row by Caubet as part of his involvement with the Sonoma County Woodworkers Association.

The association, which has about 100 amateur and professional members, has collaborated with the museum on the exhibit for 11 years now. But this year, Caubet says, there are a few changes.

A casual observer walking into the gallery might be most impressed by the sheer variety on display there. The 60 pieces range from the artfully functional to the whimsically abstract. There are pieces of furniture--tables, mirrors, chairs--that have a character and elegance you won't find in anything fresh off the assembly line. Among many smaller pieces, what woodworkers call "turnings," are Navajo bowels, vases, and other, artfully unidentifiable objects.

But to the trained woodworker, one of the outstanding features of this show is that there is not a single reproduction of a classic design. Unlike last year, this time every piece is an original. Caubet doesn't have anything against a well-crafted reproduction, but he seems pleased that this year's exhibit is all new.

"There is a lot of artistry involved," he says. "It's a lot easier to copy something than it is to sit down at a piece of paper and say, 'What am I going to make?'"

Three of Caubet's own pieces are on display, including an elegantly crafted table with a beautiful finish. He always keeps some of his work in reserve, hedging against the tendency of his fellow woodworkers to be, well, spontaneous.

"We have no idea what we're going to get until the pieces actually arrive at the museum," Caubet says with a chuckle. "There is no way to get these guys--some of them are real prima donnas--to commit in January or February to doing a piece."

Indeed, professional woodworkers tend to be an eccentric lot, according to Caubet. Many of them lead low-key lifestyles that allow them to concentrate on their art.

"Their interest is not necessarily in making a lot of money, but in living the kind of life they want to live, which is very laid-back without a lot of interference from the world," Caubet says.

MAYBE it's a good thing that financial rewards aren't terribly important to these folks, because the big bucks don't often come their way.

"Making furniture is not a moneymaking career," Caubet says. "The majority of the woodworkers that I associate with, the people who are professionals doing it full-time, their wives are the main wage earners. A lot of them don't make a lot of money. It's very difficult to sell a dining room table for $15,000."

But that doesn't stop people from entering the field. And many of the most talented and enthusiastic beginners come here to the North Coast to start their career in the intensive program at the College of the Redwoods. The main attraction is the world-famous Krenov.

"He has influenced a generation of woodworkers here on the coast," Caubet says. "They come from all over the world, from Japan, Europe, New York, and they plunge into this artsy-craftsy, hippie-type atmosphere of Mendocino. They feel comfortable there, and many of them end up staying and trying to make a living."

Caubet himself piled into his pickup truck every week, commuting from his Santa Rosa home to the school in Fort Bragg to attend the nine-month program, which is a six-day-a-week, 12-hour-a-day affair. Only 22 students are accepted every year, and of those, only a few are selected to come back for another year.

"I wasn't one of those [continuing] students, and it's probably a good thing, because my wife would have divorced me," he says with a laugh.

But still, the effort paid off, and Caubet has become a respected member of the woodworking community, developing a successful business and serving several times as president of the woodworkers' association.

Over the years that he has been involved, he's seen many changes in the field--the skyrocketing cost of wood being perhaps the most challenging. But he says the basic appeal of the craft remains the same.

"I think it's just the satisfaction of producing something that we think is beautiful," Caubet says, "and the added pleasure of discovering that other people think it's beautiful too."

"Artistry in Wood" opens July 2 with a public reception from 6 to 8 p.m. Regular exhibit hours are Wednesdays through Sundays, 11 a.m. to 4 p.m. Several workshops are offered: on July 10, "Hand-Tool Use"; on July 24, "Woodworking for Children"; and on Aug. 7, "Woodturning Small Vessels." The exhibit continues through Aug. 15 at the Sonoma County Museum, 425 Seventh St., Santa Rosa. Admission is $2 for adults, $1 for seniors, and free to museum members and children under 12. For details, call 579-1500.