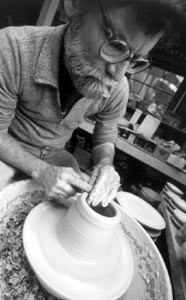 IT'S A FOG-LADEN September morning in west Petaluma, but the gloom is brightened by the soaring voice of Elton John belting out "Yellow Brick Road," which is emanating from the 1920s converted carriage house where artist Anna Corba has her pocket-sized studio.

"It's been kind of dreary this last week, so I decided to get back into my old stuff," explains Corba, 40, with a grin. "You know, Linda Ronstadt, the Beatles, Elton John--oldies but goodies."

The cozy, blue-painted studio located up a small garden path where Corba works--usually with her mellow collie dog sprawling at her side and the music cranked way up--is a flurry of activity these days as Corba, a new Sonoma County resident, prepares for her first ARTrails showing.

"I just thought it was such intriguing thing to get involved with and see what it would be like to be an artist in Sonoma County," says Corba, who moved to Petaluma from Michigan in May.

For two weekends in October, Corba (who specializes in mixed media, including semi-abstract paintings and collages) will join 114 other local artists in opening their lairs to the curious public. The artists will give demonstrations, answer questions, and show (and, they hope, sell) their work during this open-studio tour that fans out across the entire county.

Now in its 14th year, ARTrails, sponsored by the Cultural Arts Council of Sonoma County and structured over two autumn weekends, has become both a local tradition and a national draw, attracting visitors from as far afield as Florida and Hawaii.

The eclectic arts and crafts on view this year will include weaving, sculpture, woodwork, painting, printmaking, stained glass, jewelry design, and photography. The self-guided tour is free to the public--all you need is a map, transportation to tool around the county, and a little energy and curiosity. For the incurably inquisitive, the event is irresistible: It's hard to beat the sneaky voyeuristic thrill of traipsing through artists' private homes and studios.

"When you visit the artist in their own studio, see demonstrations of the process and how the art is created, and talk with the artist, it's a much more unique experience than if you just go to a gallery or to a store and buy a print," says Elisa Baker, ARTrails coordinator. "It gives you the chance to see a lot of different environments in different parts of the county and see what kind of work areas inspire the artists."

Creative work spaces can be anything from a simple kitchen in a corner of the house, to a fancy architecturally designed studio in a separate building, to a primitive barn in the backyard.

The idea has caught on. Baker calls ARTrails "the mother of all of local open-studio tours" because the event has spawned similar programs like the now 4-year-old Art at the Source, a June tour of studios in the west county sponsored by the Sebastopol Center for the Arts, the 9-year-old Art Access (held this year Oct. 9-10 and 16-17) , which spotlights Sonoma Valley artists, and the annual open-studios event at Atelier One in Graton (held on Oct. 9-10).

But ARTrails remains the biggest. According to Baker, last year's event drew more than 30,000 people, and organizers predict that this year each participating artist will receive some 300 visitors during the two open weekends.

So what is Petaluma artist Corba doing to get ready for the onslaught?

Not every artist can participate: it takes both competence and cash. A six-member jury of gallery owners and artists from outside the county judges the applicants. Baker says an artist pays a $240 membership fee to be in ARTrails and also joins the Arts Council, which costs $45.

"This year we had 65 people apply, and we chose 39 new artists for a total of 115 artists," Baker explains. "Once you've been accepted into ARTrails, you are in every year until you decide to leave."

One ARTrails perennial is stoneware potter John Chambers, 57, who has participated in the event since its inception in 1985.

"[ARTrails] started with about 70 people and has just built and built because we wanted to do a bigger-scale countywide version of what other people were doing independently," Chambers says. "The whole thing is about public contact and education.

"Sonoma County has an awful lot of artists and the numbers are always increasing, but people don't know that. This program puts the public directly in contact with the artists and builds recognition."

Chambers began working from a modest studio that through the years has blossomed into a huge separate structure next to his Sebastopol home. The studio building is now bigger than the house, he reveals with a laugh.

During ARTrails, Chambers (by now an old hand who clearly knows how to get the best from the event) opens up both the studio and his home to show his collection of salt-glazed ceramics, and he even serves refreshments. Last year, he says, 500 visitors came by.

"People are fascinated with what kind of a living situation artists have," he says. "You learn things about the personalities of the artists from their workspace, so I just let people wander around freely and see what my life is like--and they really seem to appreciate that."

From the September 30-October 6, 1999 issue of the Sonoma County Independent.