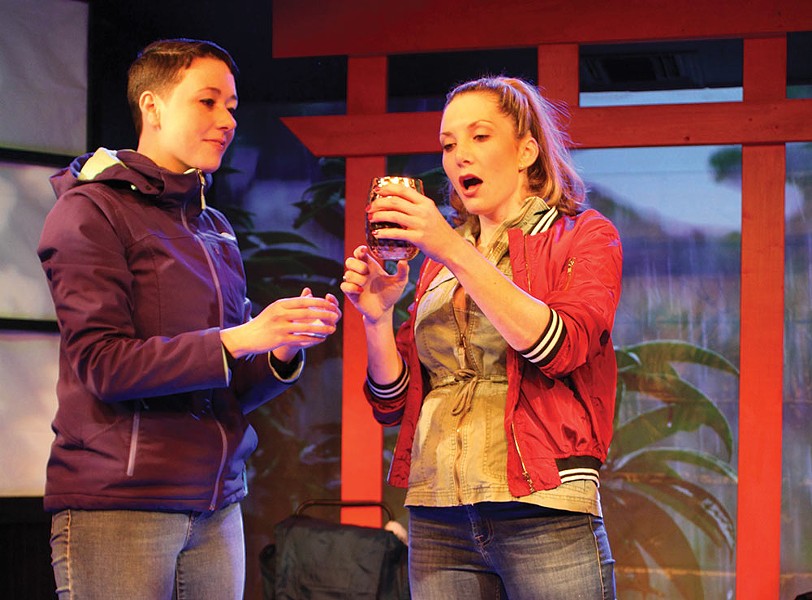 Call it whatever you like, but playwright Steven Dietz (Becky's New Car) doesn't believe in it; so much so that his play This Random World, running through May 26 at Left Edge Theatre, is even subtitled The Myth of Serendipity. The connections that people have, make, or miss are the focal point of this pleasant collection of vignettes featuring pairs of characters.

There's an over-achieving sister (Heather Gordon) and her under-achieving brother (Zane Walters at the performance I attended, Anthony Martinez at all others) bickering over the writing of an obituary. There's a couple (Paige Picard, Ariel Zuckerman) who are dissolving their relationship from across the table at a bad restaurant. There's an elderly woman (Trish DeBaun) and her caregiver (Rosie Frater) who travel the world and spend each morning looking at the sunrise. There's also a funeral home receptionist (Chandler Parrott-Thomas) and a gentleman (Norman Hall) who makes a late appearance.

How these characters connect (or don't) is something that the audience gets to discover — even if the characters never do — as the show progresses through its 90 intermission-less minutes. No point in ruining that for you now.

The play hopscotches around from such places as a living room to a mortuary to an airport to Nepal to a hospital waiting room—and accomplishes this in Left Edge's intimate theater with a combination of great technical elements. Argo Thompson's minimalist set and vibrant projection design are enhanced by April George's lighting and Joe Winkler's sound design.

Director Phoebe Moyer has an excellent ensemble at work here with Dietz's characters (with one exception) pretty much sharing the stage for equal amounts of time and each getting opportunities to shine in both comedic and dramatic moments. As the initial pairings of characters splinter off, each actor gets to display real range as their stories develop. All are excellent, with Gordon in particular exhibiting why she's one of the best comedic talents around and DeBaun providing the wisdom, strength and weary regret at the center of this World.

This show has humor and heart. What it's missing is an ending. After 85 minutes of somewhat exaggerated but nevertheless relatable humanity, this smooth-running express train of story-telling inexplicably derails. Dietz's script has a natural ending point, but he runs right over it.